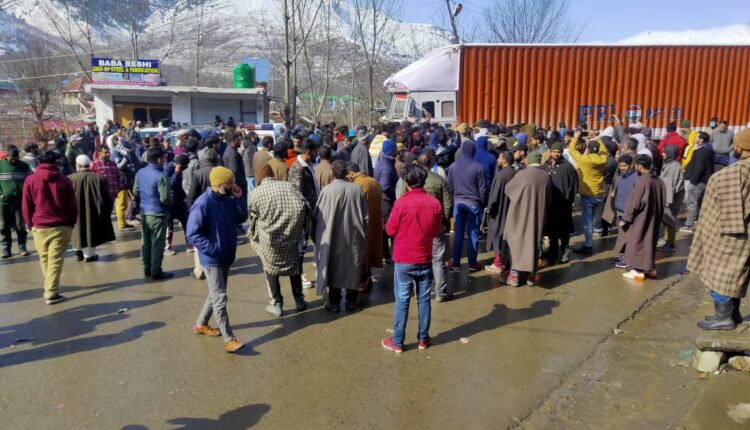 Jammu:  Two people including the driver of a Srinagar bound TATA Mobile died due to suffocation while waiting for the Jammu-Srinagar highway to re-open for vehicular traffic.

The deceased have been identified as Majid Gulzar Mir and Shabir Ahmad Mir, both residents of Kralpora, Kupwara. Their bodies were found inside the vehicle loaded with vegetables on Sunday morning.

The road between Banihal and Jawahar tunnel had got blocked due to snowfall on Saturday morning, making traffic officials to stop movement of vehicular traffic. The deceased were among nearly 1,000 people whose vehicles had got stranded on the highway in Banihal.

Sources said that both the people appear to have died of suffocation as they had stayed inside the vehicle carrying firepot to keep themselves warm during night. However, the cause of death will be ascertained after the receipt of their postmortem report, they added.

Meanwhile, other stranded people held demonstration and even pelted stones accusing the authorities of delaying the re-opening of the highway, alleging that it led to the death of duo due to severe cold. Senior police and civil officers including the Ramban Deputy Commissioner Massrat Islam rushed to the spot along and managed to bring the situation under control.

Later during the day, the highway was reopened for vehicular traffic after the clearance of the road of snow and multiple landslides at various places.

Meanwhile, to ensure safety of passengers travelling on the Jammu-Srinagar National Highway, the District Administration Ramban has urged commuters to confirm the status of the road from the Traffic Police Control Room before starting the journey.

The commuters have also been advised to avail the facilities of Rahat Centres/ Shelter Sheds which have been set up at various places en-route National Highway in district Ramban in case of inclement weather or suspension of traffic.

The SDMs have also been directed to ensure adequate accommodation for stranded passengers.

The passengers who travel from Nashri to Doda on NH-244, can contact Tehsildar Batote on 9906272786, in case of emergency.

Since, a number of passengers refuse to avail the facility of shelter sheds in case of night halts, the sub divisional administrations have advised the passengers and drivers to ensure adequate ventilation in their vehicles to avoid suffocation which can prove fatal.

The District Administration has also made a fervent appeal to the people to avoid unnecessary travelling and check weather forecast before starting the journey. They have also been urged to start their journey after confirming the status of the road from the Traffic Police Control Room and subject to fair weather.