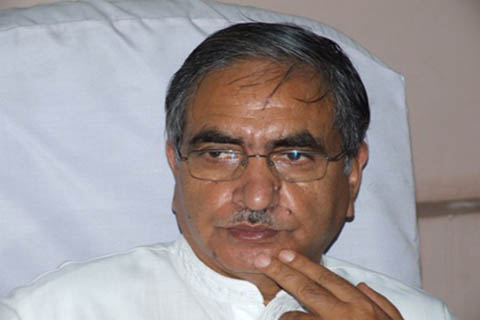 “They should reserve jobs for locals in the power projects which are being constructed or newly approved projects on Chenab River. These projects have a huge potential of providing employment opportunities to locals, ” he said while interacting with the delegation led by Vice Provincial President Jammu Syed Asgar Ali from Chenab Valley. However, it was unfortunate that the companies engaged in the Power Projects do not engage locals at any level, he added.

Pointing out that the people in neighbouring states of J&K get major 80 per cent share in jobs from skilled to unskilled, he said that the same share is denied in J&K to the local population. “There are extremely hazardous effects on the land and natural resources in Chenab Valley due to the power projects,’’ he said, adding that “the roads are sinking and villages have become unsafe in several areas.”

He expressed his serious concern over the bad effect on the environment and pressure on the resources being utilized by these projects.

After interacting with the locals, Mir said that the people of Chenab Valley have suffered heavily on account of the construction of these hydel power projects which have adversely affected the environment and resources of the area.

“An assurance was given by the previous governments for giving relief to the people of the area by charging half tariff on electricity to the households coming within the radius of five kilometers of such projects. But till date no word has been heard about it from any government. It is requested that the people of the area should get a share of atleast 5 per cent in the water-cess collected from these projects which comes to an astounding figure around four thousand crores till today and is in the deposit of the government treasury under water resources act,” added Mir.

He said a small percentage out of the fund can change the shape of Chenab Valley and its people in respect of the development of the infrastructure and other public facilities.

“The locals are in anger against their unclear recruitment policy adopted by NHPC, AFCON, JP and Patel. It seems these companies work on directives of some administrative officials and a political party which is evident from the negligence of the local population,” he said.

“They did not take up developmental activities nor do they provide any health related facilities to the population after exploiting the natural resources,” said Mir and hoped that the newly approved power projects by the GoI will give due share to the locals in jobs and development.

He reminded that the Government of India had approved three projects i.e., Pakal Dul, Kiru, Karthai, second-phase of Dulhasti and 850 MW Ratle power projects to be constructed on the Chenab River. He said that the new dams and water reservoirs will further add to the worries of the people as they will damage the ecosystem.

Syed Asgar Ali appraises that the power projects like 390 MW Dulhasti, Baglihar Hydroelectric Power Project and Sawalkote hydro electric project already functional on Chenab River and there was hope among the people when these projects started that they will get jobs and their social-economic status will improve.