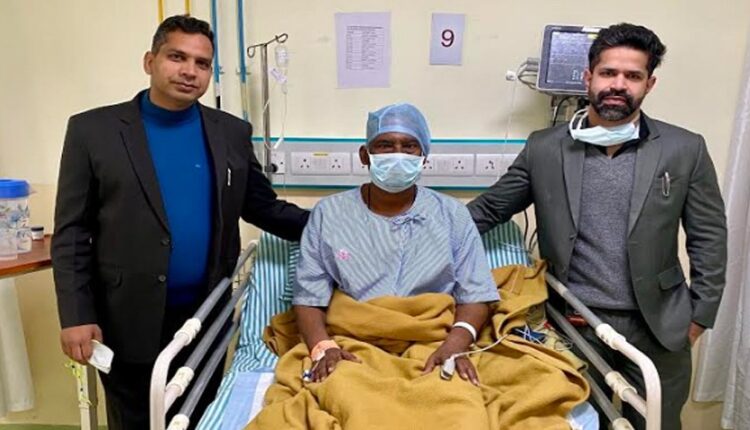 The patient was admitted to the hospital with persistent blood in urine after undergoing a renal biopsy at an outside hospital. However, he fully recovered after performance of the surgery.

Explaining the disease Dr. Hitesh Gupta (Nephrologist) said, ”at present, percutaneous renal biopsy (PRB) is widely used in clinical diagnosis and treatment of kidney diseases. Despite development of new technique and skills, post-biopsy bleeding is still unable to be completely avoided and even life-threatening complication of PRB. Treatment for post-biopsy bleeding includes administration of hemostatic drugs or sometimes surgical repair or renal resection. However, transarterial embolization is the preferred approach for renal injury.”

Explaining the procedure Dr. Nikhil Mahajan (Cardiologist) explained, “Microcolis were used in renal artery embolism. The microcoils are suitable for different diameters of arteries. The cages on the coils are easy to induce thrombosis and achieve complete embolism. The patient’s blood pressure was stable after the operation and the hemoglobin level improved. The patient did not experience re-bleeding.”

The Facility Director Sh. MM Mathawan while briefing about the world Class facilities at Narayana Hospital said “the patient after undergoing renal biopsy in an outside center was referred for a lifesaving procedure”. He further added “Narayana Hospital with its World Class Infrastructure, Highly qualified Doctors and dedicated Paramedical Staff is well equipped to provide treatment for all ailments and people of Jammu now don’t need to travel to Metro cities for treatment.”