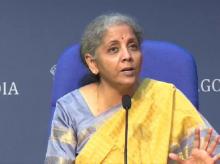 Jammu: The Union Budget here on Monday evoked mixed response, with Jammu Chamber of Commerce and Industry president Arun Gupta hailing the provision for Rs 35,000 crores for COVID-19 vaccine, adding at the same time that “nothing special has been announced for trade/industrial sector’’.

“Government of India has already announced the Industrial package of Rs 28,400 crores few days back and the notification in this regard is still awaited,’’ he said.

“The economy of the Union Territory of Jammu and Kashmir is purely based on tourism, but no focus has been laid on the tourism sector and especially in Jammu division which has been ignored from last so many years,’’ he said. Referring to unexplored tourist destinations in Jammu like Bani, Sarthal, Basoli, Panchari, Peer Panchal, Suchetgarh Border and Bhaderwah etc., he said “we are expecting big announcement in the coming State Budget in this regard’’.

The Chamber leader, however, welcomed the announcement regarding creation of 100 new Sainik Schools on the basis of PPP model, rationalization of Custom duty, exemption from filing of Income tax return for senior citizens above 75 years, enhancement of audit limit from Rs 5 crore to Rs 10 crore, proposal to revise the limit for reopening of assessments from present 6 years to 3 years only.

BJP spokesperson in the Union Territory, Dr Tahir hailed the budget saying that it includes special package for Jammu and Kashmir including the laying of new gas pipeline and extension of Centrally sponsored Ujjwala scheme.

The Central Government on Thursday extended the existing…

Union Budget 2022-23 will be presented by Union Finance…

Pointing out that the gas pipeline will be a revolutionary step relieving pressure of availability of domestic gas and help generate employment, he welcomed the Union Finance Minister’s decision to propose a Central University in Leh.

Jammu and Kashmir Congress Committee alleged the people of UT feel neglected and dismayed over the union budget which lacked the required direction and roadmap for creating better job opportunities and boost the economy.

The JKPCC chief spokesperson Ravinder Sharma said that the budget has brought no cheers to the common people especially the youth, students, famers and the labour class who suffered a lot due to worst economic slowdown and the Covid situation.

There are no efforts to boost rural economy and create job opportunities in the wake of large scale unemployment and retrenchments in recent years due to wrong economic policies of the BJP government coupled with COVID situation. There is also no respite from the ever increasing prices of all commodities of common use and unprecedented price hike of petrol, diesel despite drastic fall in the rates of crude oil in international market, he added.

Founder and chief patron of the National Panthers Party, Prof Bhim Singh, described the union budget as “rob the poor and feed the privileged class’’.

The Central Government on Thursday extended the existing COVID-related restrictions…