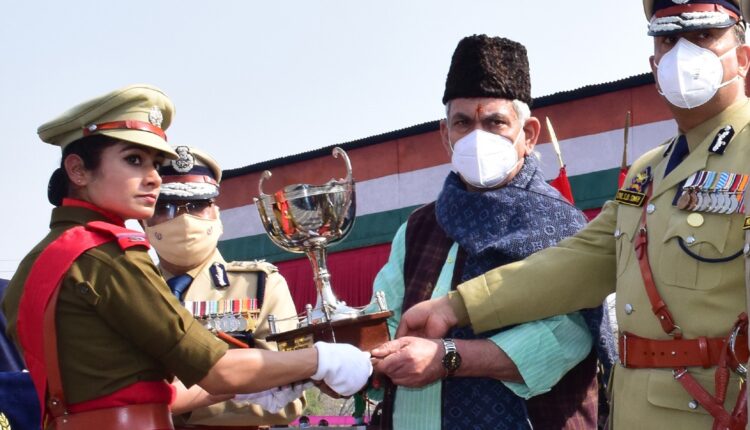 Along with eradicating terrorism from J&K, Police is entrusted with responsibility of earning trust of common people; says Manoj Sinha

“Tackling such organized apparatus and network is very crucial for peaceful social order,’’ he said, adding “I believe that to fight this gang of global networks, our young officers with communication and technology background will be a multiplier force’’. He asked the young police officers effectively tackle new challenges like cyber crime and radicalization would prove to be a benchmark of their strength and ability.

Challenges will keep changing with time, he said, adding from basic policing to dark web crime, from regular crimes to forensics, the area of your work will slowly expand. The Biggest deterrent to crime is effective investigation and conviction of criminals, he said, adding the way in which investigation is done in Jammu and Kashmir is commendable.

Significantly, many of the passing out cadets happen to be post graduate, while more than 50 are engineers and over 60 B.Tech. Some of them also hold law degree. Even during their training period, they were deployed on COVID-19 protocol duties, besides ensuring smooth conduct of DDC and Panchayat elections.

Pointing out that public service and sacrifice is the proud legacy of Jammu and Kashmir Police, Lt Governor said “the feeling that a common man should feel safe and secure and live his life without any fear is in the DNA of JKP’’. He asked the passing out cadets to remember what they have been taught during their training days by the instructors, and perform their duties with sincerity and dedication after moving out from the police academy.

Reminding them of their primary role to ensure law and order in the UT as having become active members of the police force, he said “along with eradicating terrorism from J&K, you are entrusted with the responsibility of earning the trust of common people. Honesty, integrity, hardwork, dedication will help you in discharging your duties efficiently”.