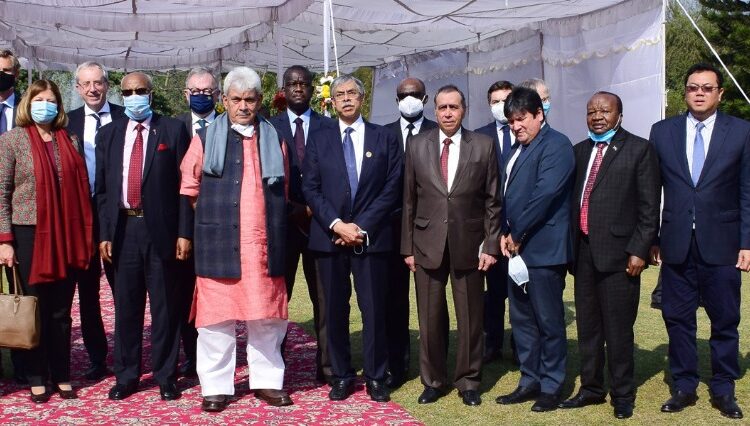 “Years of suffering for J&K people ended on 5th August 2019. Efforts of PM ushered Union Territory into a new era, bringing socio-economic development in the region and empowerment of people”, says the Lt Governor

“We are investing more than ever before in infrastructure, industries, education, healthcare, skill development, sustainable livelihood so that every citizen of Jammu & Kashmir has a safe future and recognition,” says the LG

Peace, Progress, Prosperity and People First- that is my vision for development of Jammu and Kashmir: Lt Governor

Jammu: Lieutenant Governor, Manoj Sinha today held an interaction with the Foreign Envoys who were on their two-day visit to Jammu and Kashmir to have a firsthand appraisal of government’s efforts to restore normalcy and boost development in the Union Territory.

While interacting with the Foreign Envoys, the Lt Governor spoke on the developmental changes J&K is witnessing.

He observed that an ecosystem of democratic values, welfare principles and economic development has been developed in J&K and scores of measures are being taken by the Government for development and prosperity of the UT.

“Years of suffering for J&K people ended on 5th August 2019. The efforts of respected Prime Minister Narendra Modi ushered the Union Territory into a new era, which has brought about socio-economic development in the region and empowerment of the people”, the Lt Governor remarked.

On reformative interventions being made by the Central government for boosting economic growth in J&K, the Lt Governor said that the central government headed by Prime Minister has drawn up excellent ideas and initiatives of industrialization even in far flung areas of the Union Territory so that more jobs could be created for our youth.

While speaking on the focus areas of the UT Government, the Lt Governor said that the Government is investing more than ever before in infrastructure, industries, education, healthcare, skill development, sustainable livelihood so that every citizen of Jammu & Kashmir has a safe future and earns recognition. Our collective aim is to continue implementing people-centric, development, and industry oriented policies, he added.

“Targeted solutions have been devised to address the issues like poverty, health, Skill development of youth, job opportunities and concrete steps are being taken to ensure that benefits of government schemes reach the last mile”, said the Lt Governor.

Women are also being provided with more opportunities to participate in economic development of the Union Territory and concrete support is being extended to those seeking a fresh start, he added.

Terming terrorism as the biggest enemy of human-kind, the Lt Governor said that despite relentless attempts by our neighbour to destabilize the security situation and trigger social disharmony by exporting terror, the Government is resolute towards the holistic and equitable development of J&K.

Recently, DDC’s peaceful, violence-free and fair elections were held and the three-tier Panchayat system was established to strengthen the grass root democracy. Now, the true democracy is flourishing in the UT, which is not merely about governance but the feeling of fraternity, brotherhood, communal harmony and attitude of respect and reverence towards each other.

Replying to the queries by H.E Mr. Emmanuel Lenain, Ambassador, France and H.E Mr. Abdoul Wahab Haidara, Ambassador, Senegal pertaining to the Economic development and investment friendly reforms taken place in the UT, the Lt Governor observed that a new Industrial Development Scheme of Rs 28,400 crore has been unveiled for attracting investment in the UT, besides creating opportunities for the youth.

Various incentives are being offered to the investors across the globe. Earlier, a mega relief and revival package of Rs 1350 crore was announced to help the J&K business sector to tide over their problems, he added.

On being asked about the developmental measures taken by the Government, the Lt Governor observed that the Central and the UT Government are determined to preserve and create prosperity in J&K.

“Peace, Progress, Prosperity and People First- that is my vision for development of Jammu and Kashmir”, observed the Lt Governor.

On power generation, the Lt Governor said that despite the immense potential of Hydro Power, only 3500 MW of power was generated in J&K in the last 73 years, causing small businesses and citizens to face power problems. We have approved several projects worth Rs 54,000 crore during the last 3-4 months and we aspire to generate 3500 Megawatt in only four years to make Jammu Kashmir power surplus, he added.

Speaking on the problems faced by the people of J&K in the last seven decades, the Lt Governor observed that the people were deprived of development, basic facilities, their fundamental rights, and various acts passed by the parliament for the benefit of the people.

The Lt Governor said that the Prime Minister has ensured that all the benefits of Central Acts now reach to the people.

To make J&K the fastest growing region in the country, the Prime Minister has also provided the Union Territory with Rs 58,627 crore to establish Two AIIMS, Two IITs, IIMs, and execute world class infrastructure, he added.

J&K Administration at all levels is making tireless effort to rebuild the incredible economic and societal glory of Jammu and Kashmir. A culture of corruption had seeped far into the governance. We have transformed it into a transparent and accountable system in order to create a fair and just society, the Lt Governor maintained.

The Lt Governor also sought support from the global community in shaping a new future for Jammu & Kashmir.

“My effort is to create bliss, and seeds for flowering of each and every citizen of UT. You can see blooming of development in UT for yourself and fragrance spreading on the winds, I am sure, will be carried to every corner of the earth”, said the Lt Governor.

The Lt Governor also thanked the Envoys for making this trip to see reality on the ground.

With the vision of ‘Vasudhaiva Kutumbakam’, we seek to work together as a team for the prosperity and well being of Jammu Kashmir and global community as a whole, the Lt Governor concluded.

In a Vote of Thanks, Eritrea Ambassador, Alem Tsehaye Woldermariam remarked that “Change is visible in Jammu Kashmir. He said that the Envoys’ visit to J&K is an eye opener and improved the understanding of important issues concerning Jammu & Kashmir.

Delegation in Jammu give positive feedback to visiting foreign envoys