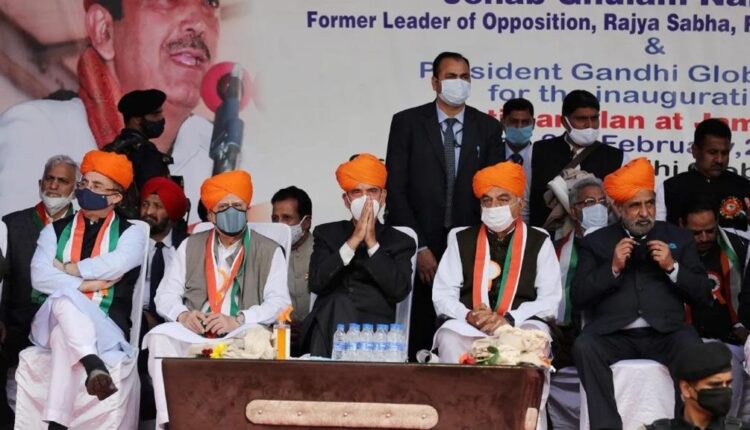 Jammu: Senior Congress leaders who formed part of 23 dissenting party leaders here on Saturday reiterated that they see the organization getting weaker over the past one decade and called for strengthening it across the country.

“We will make Congress and strengthen it too,’’ said Anand Sharma, Deputy Leader of the Opposition in Rajya Sabha addressing a function organised by Gandhian Global Family here this afternoon.

In what may be seen as attack on Congress high command, he said “we all have reached here after a long struggle’’. “None of us have airdropped. We have not come through a window or a ventilator. We have come walking through the door, through students and youth agitations,’’ he added.

Pointing out that while the political fight in the country will be fought from Jammu to Nagpur and they will fight it unitedly, Sharma said that those habitual of creating misunderstandings shall know that “our identity has been the Congress and we too have been its identity’’. “I have not given this right to anybody that someone tells me in my life that we are Congressmen or not. We can tell what the Congress is,’’ he added.

Turning to the retirement of senior party leader and leader of the opposition Ghulam Nabi Azad after the end of his term in Rajya Sabha, he said that there shall be no misunderstanding that he has retired. “He was not in government service, nor are we,’’ he added.

“I have no hesitation in saying that that Congress party can make office bearers, but every person who is an office bearer cannot become a leader of a province or the country,’’ he said. Only a few whom people accept become leaders and that too not only in his own area but in even in far off Kanyakumari, Maharashtra, UP and Kerala, he added while referring to Azad.

Earlier, the tone and tenor of the meeting was set up senior Congress leader Kapil Sibal with his remarks that he cannot speak lie while standing on the platform associated with the name of Mahatma Gandhi.

Reasi Police arrest Poonch resident for abduction, rape of a…

It is an occasion for telling the truth and we will speak it, he said, adding the “truth is that we see Congress getting weaker and that is why we have gathered here’’. “We had gathered earlier also,’’ he said, adding that “we have to unitedly strengthen Congress. This is the truth’’.

It hurt all of them when they came to know about the decision that Ghulam Nabi Azad is being retired. “We did not want him to retire from parliament as ever since he joined politics there has not been a single ministry he had not been a minister and there had been not a single political leader he did not know personally,’’ Sibal said.  Even as leader of the opposition whenever he used to call anyone, all the leaders visited him for a meeting, he added.

Pointing out that “only an experienced leader can do it,’’ he said he knows the ground reality of Congress in every district of every state. “I do not understand as to why Congress is not utilising this experience,’’ he added.

Further explaining people about Azad’s role, Sibal said “a person who flies an aircraft is an experienced person. An engineer also accompanies him to detect and repair any malfunctioning in the engine. Ghulam Nabi ji is an experienced as well as engineer,” he added.

All of them said that they had the support of many others, adding that they were for unity of entire Congress.

They also criticised BJP government at the Centre, saying that people were hit hard by rising prices, unemployment among other things and called upon people to get ready “to fight for another independence’’.