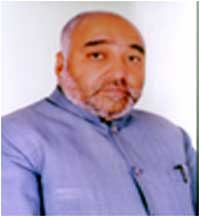 Poonch: Prominent Gujjar leader and intellectural, Shamsher Hakla Poonchi here on Monday urged the UT’s Lt Governor Manoj Sinha to frame a strong policy to ensure proper functioning of mobile schools set up for the children of nomadic Gujjar and Bakarwal community across Jammu and Kashmir.

Pointing out that Gujjars and Bakarwals are divided into three categories including settled, half settled and unsettled,  he said that their needs and the problems are also different. Gujjar Bakarwal tribes are educationally, economically, socially and politically backward, he added.

The half settled and unsettled among the Gujjars and Bakarwals along with their belongings, families and cattle move to highland pastures so as to have adequate grazing fields for their cattle during summer. There they live for about six months and return to the plains at the onset of winter,

The children of half-settled and unsettled among the Gujjars and Bakarwals are lagging behind in the field of education as the benefits of education and other government schemes have not reached them. He demanded the Government of India to open boarding schools on pattern of Navodya Vidalya for Gujjar-Bakarwal girls and boys in all districts of J&K Union-Territory, besides establishing a tribal university in J&K for their children.