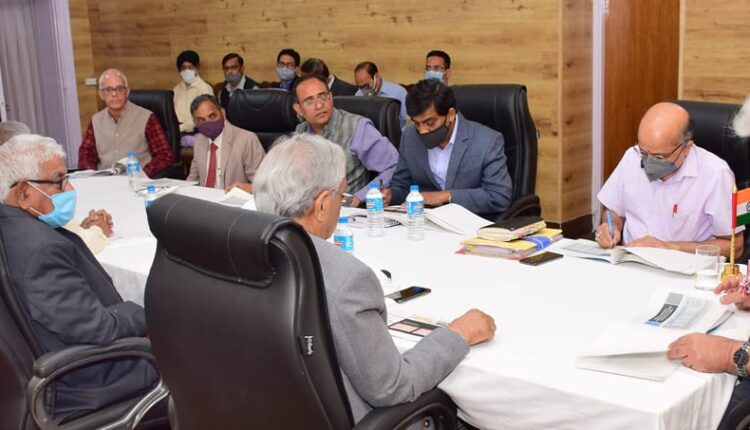 Jammu: Lieutenant Governor, Manoj Sinha here at Raj Bhavan on Thursday chaired the third high Level meeting with the team of experts from Power sector, senior officials from Jammu and Kashmir administration, and Power Development Corporation Limited to revamp the power supply system in the J&K.

The Lt Governor directed the concerned officers to increase the pace of works undertaken to ensure mitigation of power-related issues to the people of Jammu and Kashmir. He passed strict instructions to remove all bottlenecks and hurdles that impede the timely completion of augmentation and restoration works of various power projects.

While taking a strong note of the delays in tendering and awarding of projects, the Lt Governor asked the concerned officers to fix responsibility and take strict action for the non-compliances. He also directed for initiating an inquiry in the erring matters and submit the report at the earliest.

In order to speed up the works on different power projects, the Lt Governor directed the concerned to come up with a policy framework for procurement of spares and inventory, and directed them to conduct an auction of the scrap and discarded items.

A detailed PowerPoint presentation was given on “Updated status & Next steps” and discussion was also held for immediate focus on Jammu division for ensuring adequate supply in the coming summers.

Pertinently, Lieutenant Governor has been emphasizing on the need to mitigate the shortage of power supply in Jammu during summers, and in Kashmir region during winters. It is in this context that regular meetings are being chaired by him to closely monitor the progress on power reforms and reducing Transmission & Distribution losses in J&K.

The Lt Governor asked the Power Development Department to complete the digitization work in the power sector on priority for its smooth functioning.

The Lt Governor was also informed that several site visits were carried out by the officers to get first-hand review of the projects taken up to revamp power sector in the region.

The meeting was also informed about the status of restructuring and unbundling of JKPDD, JKSPDCL & JKSPTCL besides, the appointment of Administrative Secretary & Director (Finance) on the boards of JKPTCL, KPDCL, JPDCL; appointment of MD for the new corporation, etc.