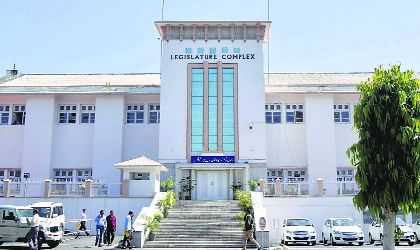 Jammu: Asserting that the current situation in Jammu and Kashmir was chaotic,e-Legislators’ Council has demanded early resumption of democratic political process in the erstwhile state of Jammu and Kashmir.

The Council held a meeting here under the chairmanship of former MLA Qazi Jalal-ud-Din to discuss the current political, social and economic situation prevailing in Jammu and Kashmir.

The participants observed that delay by the union government in restoring the democratic political system in Jammu and Kashmir creates an adverse affect and negates the very purpose of federal structure. They said that the political leadership, be it from regional or national parties, have sacrificed and given blood to nurture political democratic space in the trouble torn state.

They further observed that in absence of public representative government the masses were facing several problems and programmes and policies were being made in cosy official spaces of civil secretariat. “There is complete gap between the administration and general masses. The people are running from pillar to post to get their grievances and issues redressed but only to be turned away. The prevailing system needs to be immediately check”, the meeting resolved.

The participants said that the former legislators and political workers of Jammu and Kashmir have a constructive role in steering out the erstwhile state out of the current political impasse. “We cannot be a mute spectators to the current situation. Instead, we will be reaching out to the masses and administration in an attempt to bridge the gap between the government and people”.

The meeting also expressed serious concern over the rampant corruption in some of the government offices from UT down to the district level. “We urge and expect Lt Governor Maoj Sinha to personally check the system which was proving detrimental for the interest of Jammu and Kashmir and government,” the ex-legislators said.

56-day Amarnath yatra to begin in Kashmir on June 28