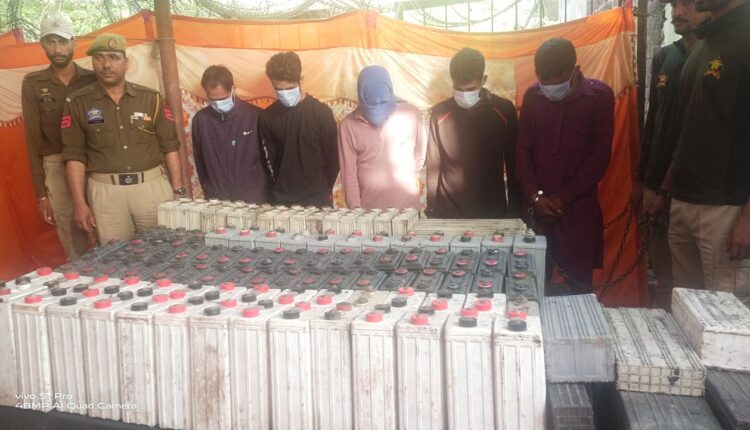 Jammu: In a major breakthrough, Jammu and Kashmir Police on Friday busted a gang of burglars who were involved into the theft of mobile tower batteries in Jammu and Samba districts for the last four years.

Pointing out that he was presently living at Belicharana, Jammu, police said during questioning , he revealed the names of four other accused namely Mohammad Irfan, Mohammad Saleem Rather and Imran Ahmed Rather, all hailing from Chinot in Bhaderwah and present living at Belicharana Jammu, besides Jamat Ali Belicharana.

All four of them were taken into custody and on their disclosure 150 mobile tower batteries valuing Rs. 18 lakh have been recovered so far.

It is pertinent to mention that on March 16, these thieves had made a burglary attempt in a telecom tower in Bishnah, but fled leaving behind a vehicle after police reached the spot. After getting some technical and physical evidences and generating an input about the movement of the kingpin Bilal, police arrested him at Miran Sahib.

All the accused were previously employees of various mobile companies like Airtel,Jio, Vodafone etc and they had full technical knowledge about mobile towers. The group had purchased a Van bearing no. JK02M-0941 and a Bolero Pickup bearing no. JK02AE-6078 for commission of crime, both the vehicles have been seized.

The modus operandi of the gang was that they targeted the rural mobile towers as these towers were without  guards for protection and using their previous experience of dealing with batteries accused committed the crime. The areas targeted by them includes Domana , Jajjar Kotli, Sidhra, Miran Sahib, Bishnah, R S Pura, Vijaypur and Samba. They used to break open the doors by using hammers and screwdrivers.

Police are also working on arresting the scrap dealers where these batteries were being sold by these thieves.

As many as 06 FIR’s of P/S Gandhi Nagar , Miran Sahib , Bishnah and R S Pura have been solved.

Subsequently three snatching incidents which happened in the areas of Narwal, Bathindi,Trikuta Nagar and RS Pura were also solved and snatched money is being recovered. According to police more recoveries and arrests will happen in near future.