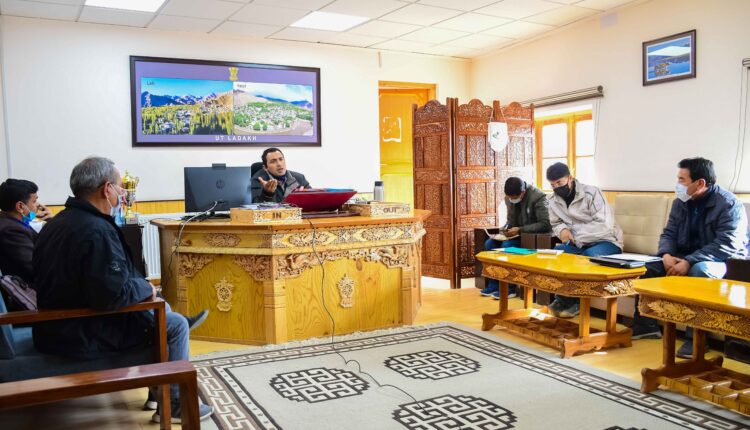 Leh: Installation of one to two pheromone traps per acre, use of pheromone dispensers and light traps are some of the measures taken by the UT administration to control Codling moth in Ladakh.

The information came at a meeting convened by UT’s Secretary Agriculture and Horticulture, Ravinder Kumar, to review actions taken by the Leh district administration and concerned departments to control the Codling moth.

The officials apprised the secretary of the management strategies, including mass awareness campaign on physical /cultural /mechanical methods, burlap, installation of pheromone traps (1/2 traps/acre), installation of pheromone traps for mass trapping (1/2 traps/tree), pheromone dispensers, use of light traps, to control the moth. The officials also apprised him of biological methods to control the moth.

While discussing the schedule of the action plan, the officials informed him about their plans to conduct awareness programmes, study the behaviour, life cycle, ecology and technical know-how about identifying target windows or sites for the effective management of the pest.

The officials also shared details of field surveys for identifying hot spots of pest infestation in the district, procurement of machinery and other tools and materials to prepare for the implementation of different management strategies during the season.

During the meeting, the officials informed the secretary about the constitution of a committee in Kargil comprising scientists from SKUAST and KVK. Also informing about conducting camps to raise awareness among farmers, they further apprised the secretary of the folders and pamphlets prepared by them on codling moth.

The Secretary impressed upon the officials to start the action plan by April 1. He also directed the concerned officials to begin all the planning and work. He exhorted the officials to prepare a communication and awareness plan to sensitise the farmers about controlling codling moth in both districts.