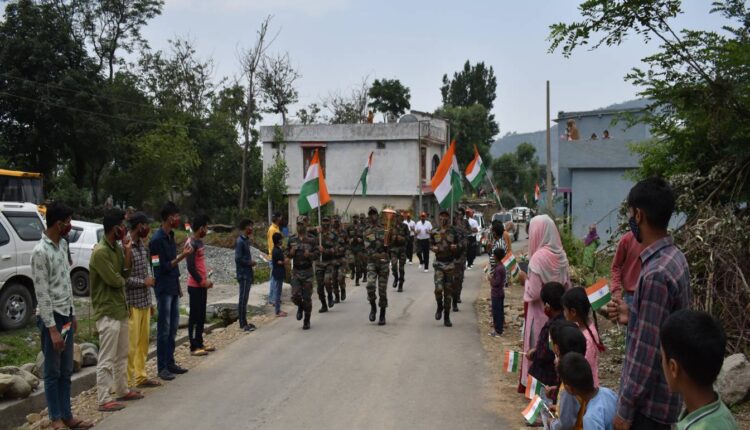 Jammu: In December 1971, Indian Armed Forces secured a decisive and historic victory over Pakistan Army which lead to creation of Bangladesh, erstwhile East Pakistan, and also witnessed the largest military surrender of nearly 93,000 prisoners of War from Pakistan Army. To commemorate the 50th year of this emphatic military victory, the Honourable Indian Prime Minister, Shri Narendra Modi lit up the ‘Swarnim Vijay Varsh Mashal’ or ‘Victory Flame’ at the National War Memorial in Delhi and started a yearlong celebration in an effort to recognize the valour, bravery and sacrifices made by gallant soldiers of Indian Army soldiers. The celebrations shall culminate on Vijay Diwas on 16 Dec 2020.

Today the ‘Victory Flame’ was brought to the home of one such hero of our Nation, Late Lance Naik Malik Mohd Iqbal Malik, VrC at Darhal, Thanamandi, District Rajouri (J&K). He was posted to 1 Jammu & Kashmir Militia (SHER-E-KASHMIR) during Indo-Pak War of 1971 and attained martyrdom while charging at enemy mortar post and was awarded Vir Chakra (Posthumously) for his conspicuous act of gallantry. Smt Sardara Begum, resident of Village Darhal and Veer Nari of gallantry award winner Late Lance Naik Malik Mohd Iqbal, VrC (Posthumous) was felicitated by GOC, Romeo Force in a solemn ceremony held at her residence. The Flame today saw the collection of soil from  house of the gallant son of India which will be taken to Nation War Memorial, New Delhi for plantation of a tree on the name of Late Lance Naik Malik Mohd Iqbal, VrC (Posthumous). The said event was attended by dignitaries of Army and Civil alike. To suitably commemorate the said event, keeping COVID protocols in mind, the victory flame was then taken to Pargal Company Operating Base of Indian Army for night halt. The entire celebrations left the emotions of people high with slogans of Bharat Mata Ki Jai and Saheed Lance Naik Malik Kohd Iqbal Ki Jai.

Over Rs 2.50 lakh including demonetised notes of Rs 500 found at beggar’s shelter in Nowshera