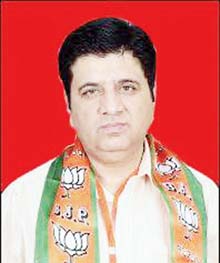 Jammu: Jammu kashmir Bhartiya Janata Party has lauded the immense contribution of BVR Subramanyam who gets transferred from post of Chief Secreatry for bigger assignments in Union Government because of his immense contributions in field of administration and indepth knowledge of his field

Chief Spokesperson of Bhartiya Janata Party Sunil Sethi noted that history will not forget his huge contributions for bringing peace and stability in Union Territory after the historical decision to undo the wrongs committed by Art 35A and Art 370 of Constitution of India . Subramanyam by his astute Administrative skills succeeded in taking the newly formed Union Territory through what otherwise could have been troubled time .

Sunil Sethi also pointed out that in the process of maintaing peace and stability some decisions were to be taken by govt which may not be to the liking of some political circles particularly of Kashmir who had adopted to practice of political blackmailing and in fact these elements are now giving vent to their frustration by making statements in print or on social media which are disparaging to the historical role of Subramanyam as Chief Secreatary of the Union Territory.

He said that it goes to the credit of Outgoing Chief Secreatary that beaurocratic system in place in Union Territory is streamlined and well oiled . In the way he put many political connected haevyweights in Beaurocracy at their right place which may not be to their liking for which some Bearcats are making statements which are factually false .

Chief Spokesperson further added that BVR Subramanyam brought urgency and accountability to the administration though there may be some issues where administration may have acted in better manner like Covid Management. The decision to remove 35 A and effects of Art 370 and applying constitution completely to Jammu Kashmir will be remembered as historical moment of Uniting India with no room for attributes of constitutional separation.

He said that BVR Subramanyam is going to a very important position as Secreatary to Commerce Ministry during these bad financial times and it is due to his hard work that he has been put to such crucial and important assignment to stir the economy of the country after impact of Pandemic Covid 19.

For first time in past three months, Jammu reports lesser number of Corona deaths and cases than Kashmir