16.89 lakh devotees pay obeisance at Mata Vaishno Devi till May 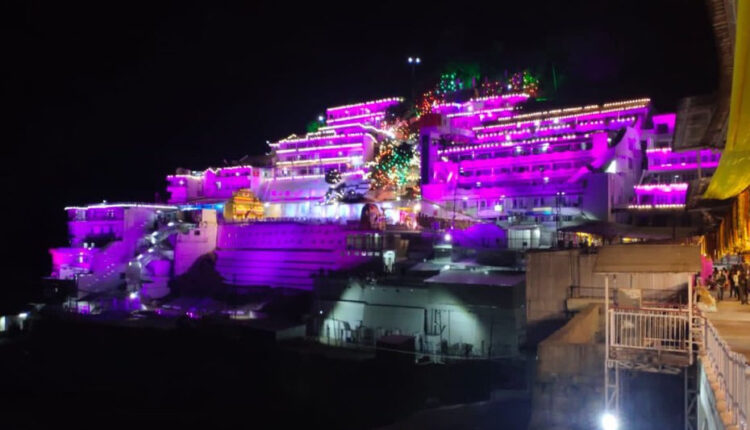 JAMMU: The number of devotees to Shri Mata Vaishno Devi Cave Shrine has started swelling with COVID cases taking a nosedive.
Till May this year, 16.89 lakh pilgrims have paid obeisance at Bhawan situated in Trikuta Hills of Reasi district in Jammu and Kashmir.
An official of Shri Mata Vaishno Devi Shrine Board said that in the first three months this year, the number of pilgrims has increased with the settling of the first wave of Covid, and 15000 to 20000 devotees reached daily at Katra to perform the pilgrimage, adding, “with the second wave hitting the country, the number declined but the Shrine remained open even during this period.”
In April and May, a few hundred devotees reached the Bhawan, mostly locals.
“Presently the number has started increasing and once again, 2200 to 2500 pilgrims are daily arriving at Katra to perform the pilgrimage,” he added.
In the first five months of the ongoing year, a total of 16,89,698 devotees had paid the obeisance.
In January, a total of 4,08,061 devotees, in February, 3,89,549 devotees, in March, a total of 5,25,198 devotees, in April, 3,21,735 devotees, and in May, a total of 45,155 devotees had visited the cave shrine.
“It is expected that the yatra will increase once train service resumes completely,” he added.
Meanwhile, the eateries run by Shri Mata Vaishno Devi Shrine Board as well as refreshment centers etc. are fully operational.
Along with this, the market at Maa Vaishno Devi Bhawan is also open so that devotees do not face any problems regarding meals.
The guidelines issued by the government from time to time are also being strictly followed, he said. (AGENCY)

Devika project is for all, suggestions welcome from every Party: Union Minister Dr Jitendra Singh