Devika project is for all, suggestions welcome from every Party: Union Minister Dr Jitendra Singh 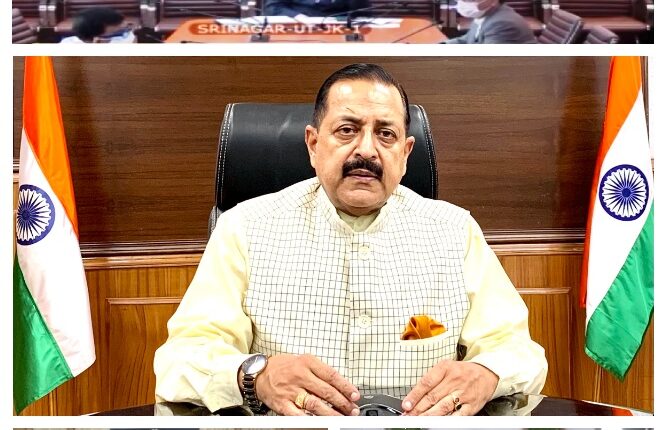 NEW DELHI: Union Minister Dr Jitendra Singh today said that Devika Project is for all and therefore suggestions are welcome from every Party. He said, Devika is not a mere project but a matter of faith for everyone particularly for the people of Udhampur and therefore any suggestion or input coming from any quarter should be viewed positively, regardless of the political affiliation or political party of the person who puts forth the suggestion.
At a high level meeting, attended among others by Chief Secretary Arun Kumar Mehta, Principal Secretary Housing & Urban Development Board Dhiraj Gupta, DC Udhampur Indu Kanwal Chib, the concerned Chief Engineers and senior officers, Dr Jitendra Singh appealed to the concerned authorities to take all the sections of society into confidence, so that everybody can share collective pride in the fact that the North India’s first- of- its- kind project is coming up in Udhampur and it has to be brought up in a manner that in future it is seen as a role model for the entire region. He asked the Deputy Commissioner Udhampur and the concerned authorities to be open to suggestions coming from the public and civil society, and wherever there is a merit or reasoning in a suggestion, they should not stand at prestige or hesitate in adopting it.
Comparing this project to the ambitious Namami Gange programme of the Central Government in terms of its significance and importance, the Minister lauded Prime Minister Narendra Modi for sanctioning this ambitious project .
Recalling his visit to the project site in January this year, Dr Jitendra Singh said, he had expressed disappointment at the slow pace of work but unfortunately the second wave of COVID has also been a challenge. He, however, hoped that now that things have been streamlined to get it executed with better coordination between executing agencies, it would be possible to complete the project by the beginning of next year.
Referring to reports about the alleged lack of coordination between contractor agency and the engineering wings, Dr Jitendra Singh said, after the last meeting, a fine had been imposed on the contractor and the authorities had given assurance that they would ensure optimum coordination in the execution of work. At the same time, the Minister insisted that any compromise in the quality of work will not be tolerated by any means.
Offering his input on the basis of his technical experience, Chief Secretary Arun Mehta asked the Chief Engineer to ensure technology neutral mechanism and at the same time he also assured free flow of funds from the Government to ensure uninterrupted and timely completion of the project.
The work on the Rs.190 Crore project under the National River Conservation Plan (NRCP) started in March 2019. Under the project, bathing “ghats” (places) on the banks of the Devika River will be developed, encroachments will be removed, natural water bodies will be restored and catchment areas will be developed along with cremation ground.
The project includes the construction of three sewage treatment plants of 8 MLD, 4 MLD and 1.6 MLD capacity, sewerage network of 129.27 km, development of two cremation ghats, protection fencing and landscaping, small hydropower plants and three solar power plants. On completion of the project, the rivers will see reduction in pollution and improvement in water quality.
The Devika river also holds great religious significance as it is revered by Hindus as the sister of river Ganga. In June last year, Dr Jitendra Singh had also inaugurated the important Devika Bridge in Udhampur.Apart from taking care of traffic congestion , the Devika Bridge was also meant to help smooth passage of Army convoys and vehicles.

16.89 lakh devotees pay obeisance at Mata Vaishno Devi till May