`My father was a brave man, he died for the nation’; son of deceased BJP leader 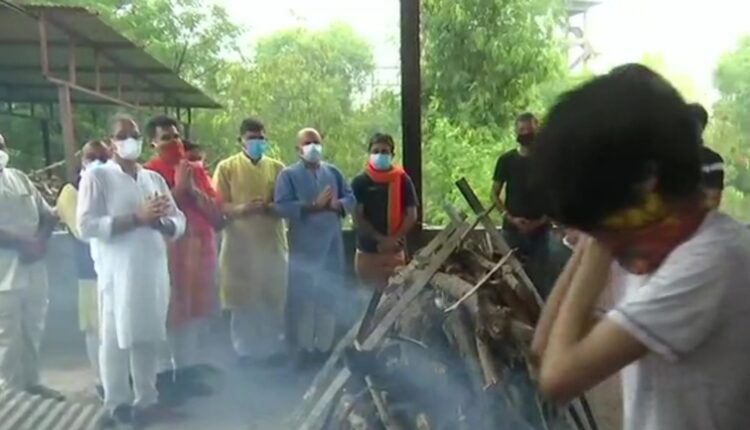 “My father was a very brave person and he had sacrificed his life for the nation,’’ said his 17-year-old son Paras. “Now the nation too shall think about them’’ , he said, adding that he was the only earning member of the family.

Last time, he came home on May 18 on his father’s death and after performing his last rites, he had returned to the Valley on Monday for serving the people there, he pointed out. After reaching there, he rang up Paras, a 12th class student, and asked him to concentrate on his studies and also take care of the family.

Pointing out that his father was the only earning member of the family, Paras sought an enquiry from the government into his killing. To a question, he said that he was prepared to return to Kashmir provided government ensured their security there.

Jammu and Kashmir BJP described the killing of Rakesh Pandita a security lapse, with BJP general secretary (organization) Ashok Koul saying that while the deceased had somewhere committed a mistake, the government too cannot escape its responsibility in the matter. Did the government and the police set up not know that “unidentified criminal and terrorists’’ were moving in Tral, he asked, adding “I believe that it is the failure of the government and the police, otherwise such incidents would not have occurred’’.

Paying homage to Pandita at BJP headquarters here, Koul recalled the killing of a BJP leader Waseem Bari along with his family members including his father and brother, all of whom had in total ten PSOs. But terrorists killed trio in front of ten PSOs, he pointed out. “This if the biggest lapse on part of the government that such type of incidents are happening. People armed with guns are openly moving in the Valley and it is silent,’’ he added.

BJP spokesperson Brigadier Veteran Anil Gupta said that there are glaring omissions into the killing of Pandita which need to be investigated by the police to ensure that such killings do not become frequent in Kashmir. Such killings will also hamper the proposed move of the kashmiri pundits return to the valley, he added.

“Yet again last night, kashmir Valley has been subjected to another act of barbarism which has no parallel. The killing of Rakesh Pandita, a bjp leader, is not only condemnable, it also speaks volumes of the courage with which minority community is staying there,’’ he said.

“Behind this sinister killing is the “jihadi agenda’’ which is that they are not happy with Kashmir being the Muslm majority region, but they want Kashmir only to be for muslims. This is not acceptable to us.  And we will never let that happen,’’ he added.

Pointing out that the sacrifice of Rakesh Pandita will not go waste, he said that while the killers are yet to be identified, but whosoever they were, they are the enemies of the humanity, he said they have no place in the society. They deserve no mercy. They will soon be arrested and held accountable for this barabaric act. They will also meet the same fate which Rakesh Pandit met.

Praying for the departed soul and expressing sympathies for the bereaved family, he said that as and when Rakesh Pandita left his place without PSOs, the latter should have informed the police control room so that immediate action could have been taken either to stop him, or to ensure that necessary security is provided to him. However, the PSOs did not do that, he pointed out, asking “Isn’t it part of the SoP and if it is then why it has been violated’’.

He also asked as to how terrorists came to know that he was staying overnight at his Muslim friend’s house. Who informed the terrorists, he asked.

My prayers for the departed soul and sympathioes to the bereaved family…what was their fault, what was thefault of wife. Of the children.’the episode also raises certainquestions on the efficacy of the police and the SOPs issued by police for the protected persons.

These are glaring omissions which need to be investigated by the police to ensure that such killings donot become frequent in Kashmir, he said, adding that such killings will also hamper the proposed move of the kashmiri pundits return to the valley.  Let us pray for Rakesh Pandit and his family, he added.

People’s Democratic Party (PDP) president Mehbooba Mufti condemned the killing of the BJP leader. ”Shocked to hear that BJP leader Rakesh Pandita has been shot dead by militants. These senseless acts of violence have brought only misery to J&K. My condolences to the family & may his soul rest in peace,” the former Jammu Kashmir chief minister said in a tweet.

Raina further said, ”The terrorists causing a bloodbath in the valley will be eliminated. It is a murder of humanity and Kashmiriyat.” In June last year, a Kashmiri Pandit sarpanch was shot dead by militants in South Kashmir’s Anantnag district.

Ajay Pandit (40), who was a Congress member and the sarpanch of the Lukbawan Panchayat halqa in Anantnag’s Larkipora area, was shot dead by the militants in his native village, police had said.

Rakesh Pandita’s killing was the second such incident targeting elected Kashmiri Pandit members of the urban and rural local bodies in last 12 months. Kashmiri Pandit leaders alleged that it was an attempt to trigger a ”fear psychosis” among Kashmiri Pandits as was done in the valley in the 1990.

CBSE evaluation criteria for Class 12 are under consideration and it would take upto 2 weeks. Experts would look at all the possibilities and make a decision: CBSE Secretary Anurag Tripathi

All States/UTs to launch a special drive to issue National Food Security Act (NFSA) ration cards to most vulnerable & economically weaker sections in urban & rural areas, by utilizing the available coverage under their respective NFSA limits: Govt of India