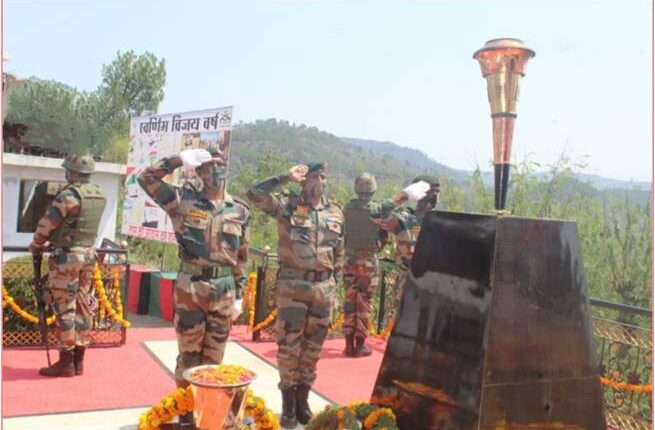 Jammu: In commemoration of 50 years of 1971 Indo-Pak war, in which the Indian Armed Forces secured a decisive and historic victory over Pakistan, nationwide celebrations started on            16 December 2020 naming year as “Swarnim Vijay Varsh”. Under this grandiose event four victory torches are being circulated in four cardinal directions pan India. The sacred victory flame was received at Kallar Junction by Commanding Officer, Rashtriya Rifles Battalion at Lam in District Rajouri (J&K). The ‘Swarnim Vijay Varsh Mashal’ was taken to the epic battle ground of Shaheed Garh, where residents of Lam had laid down their lives in protection of their motherland. An event was held at Saheed Garh, War Memorial and wreath laying ceremony was organised to pay homage to martyrs. A two minutes silence was observed in reverence to the valiant soldiers. The events of 1971 Indo-Pak war including stories of the valor and courage displayed by our soldiers were highlighted, which contributed towards achieving a momentous victory. The brave veterans shared their awe inspiring experiences of the war which was highly motivational and filled youth with enthusiasm.

Thereafter felicitation of Veer Naris, War Veterans, VDCs and Home Guards, especially those who fought in 1971 war, was carried out. The event culminated with the pledge of reflecting our pride for the nation in our actions to glorify name of the country. Public reciprocation of the event was displayed by the drawings and paintings on Indian Army theme by young generation of Lam.

Man who faked his own disappearance, recovered by Udhampur police in 24 hours