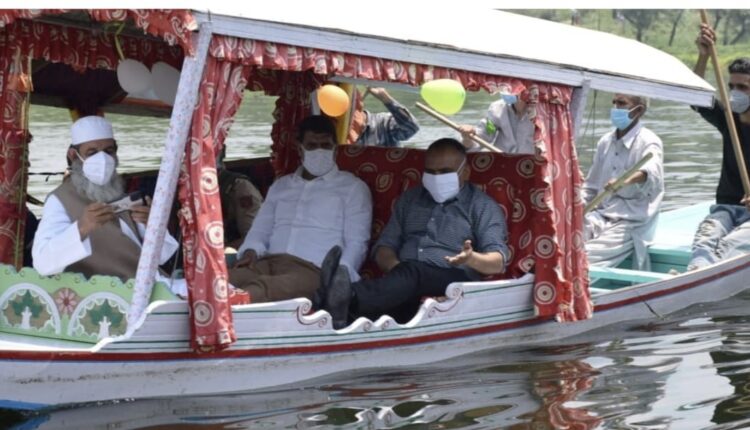 Takes stock of restoration work, calls for conservation of waterbodies

Srinagar: On the eve of World Environmental Day, the Divisional Commissioner (Div Com) Kashmir, Pandurang K Pole today called for conservation and restoration of pristine glory of all lakes and water bodies.

The Div Com said this during an extensive tour of various water bodies including Nigeen, Gilsar, Khushalsar lakes, Nalla Amir Khan and other water channels in Srinagar to take on spot stock of restoration and cleaning work.

Appreciating work done by LAWDA, SMC, F&IC and NLCO jointly for restoration of these waterbodies in past two months, the Div Com said their work is quite visible. He instructed the concerned shall continue the work in full gear to restore pristine glory of these water bodies.

He said that Government shall carry out the entire revival work in Gilsar lake and parameter work of Khushalsar, while as NLCO and Community has been doing muck clearance and restoration in interiors of Khushalsar lake. Similarly, restoration work of Pakhribal and Nallah Amir Khan is being carried out by LAWDA.

Div Com appealed people to stop littering and throwing garbage in waterbodies leading to their degradation which poses great threat to the human existence.

Stressing on community participation, the Div Com directed concerned to aware and sensitize people on importance of conserving natural resources in Kashmir.

He said that SMC has doubled the garbage collection efficiency in the Srinagar City.

In past two months the daily waste collection has gone up from 350 tonnes/day to 620 tonnes a day.

The sweeping is done in two shifts morning and evening in the market areas. SMC has been lifting the muck and garbage removed from the Dal Lake and other water bodies. The garbage and muck taken out from Khushalsar and Gilsar lakes is being lifting on daily basis using JCBs and heavy vehicles.
Under Smart City Mission, the rejuvenation of Gilsar Lake has also been taken up.

The Irrigation & Flood Control Water Master as well earth moving machinery has been put in place which is removing the garbage, muck and weed from Khushalsar and Gilsar lakes.

Similarly, LAWDA has also put all men and machinery on job and intensified its cleaning and restoration work of waterbodies in Srinagar. The work done in past two months has brought tangible results in restoration of our water bodies.
During the tour, various public delegation called upon Div Com and raised their demands and issues with him. The Div Com assured them that all their genuine issues shall be addressed on priority.