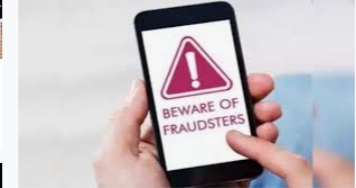 The accused lady has been identified as Daljit kour W/o Shingara Singh R/o Sahnewal, Ludhiana Punjab.

On 20-02-2021, complainant namely Inder Pal Singh S/O Des Raj R/O H. No. 03 State Bank Colony Talab Tillo Jammu reported at Cyber Police Station Jammu that he was duped by unknown fraudsters on the pretext of buying units of Canadian Pension fund and convinced the complainant for good returns. Complainant got trapped in the luring offer and consequently lost Rs 34 lacs in consecutive 36 transactions.

During the course of investigation I/O succeeded in identifying the lady accused whose three bank accounts viz yes Bank, Kotak Bank and Bank of India were involved, in which total of Rs 24 Lacs of the complainant’s defrauded hard earned money was credited from complainant’s account.

SP Cyber Police Station after ascertaining the location of the lady accused deputed dedicated team headed by Inspector Vikram Sharma, Investigating officer of the case under the direct supervision of DySP Cyber Priyanka to apprehend the accused.The deputed team acting swiftly arrested the accused from Snehawal Ludhiana Punjab alongwith her 02 mobiles and sims as well as 08 banks Paasbooks/02 ATM cards registered in her name. Further investigation revealed that she is graduate of 1980. She was brought at Cyber Police Station Jammu after completing all legal procedures. Police is also searching for other fraudsters involved in the commission of the offence. Further sustained questioning of the arrested accused by the Police is going on to ascertain involvement of the accused into the case.

Police recover over 16,000 sims from 7 people arrested in connection with the cybercrime syndicate in Cuttack. Of the seven accused, two are service providers.