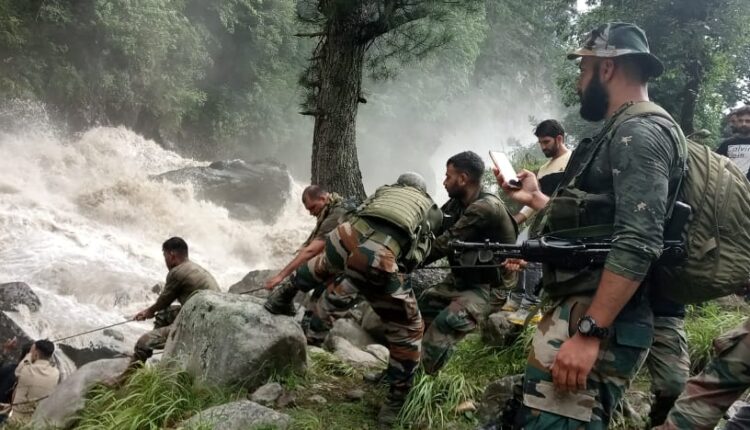 Jammu: Separate cloudbursts hit nearly half a dozen places in the Union Territories of Jammu & Kashmir and Ladakh since Tuesday night, killing at least seven people and injuring 17 others in Kishtwar district’s Hunzar village in Dacchan area.

Fourteen people were still missing, while over a dozen houses, a ration depot and nearly two dozen cow sheds damaged in the area. Two of the dead include women and among the injured, five were stated to be critical and admitted in Kishtwar district hospital.

Sources said that the victims were sleeping inside their houses when flash floods triggered by cloudburst hit Hunzar village around 4.30 am.

Two more cloud bursts had hit remote Lambard area – one at Paddar and another Patnazi (Bounjwa) in Kishtwar district also at 10.30 pm and 11.35 pm, respectively. However, there had been no report of loss of life, except damage to one or two bridges in Saranga-Naga and Bounjwa areas, besides partial damage to 14 MW Power Project at Dondi disrupting power supply in some villages.

A cloud burst was also reported in area around Amarnath cave in South Kashmir Himalayas. However, there have been no damage, or loss of life or injury to anybody as the pilgrimage there already stands cancelled in view of COVID-19 pandemic situation.

Cloudbursts hit two villages – Khangral and Sangra in Kargil district of the Union Territory of Ladakh also, reportedly damaging a hydel power project and some houses. Though there have been no casualties or injuries in the cloud burst, the Kargil-Zanskar road was closed, sources said, adding that it has been after a long time that a cloud burst has triggered flash floods in the area.

Prime Minister Narendra Modi in a tweet said that the “Central Government is closely monitoring the situation in the wake of the cloudbursts in Kishtwar and Kargil. All possible assistance is being made available in the affected areas. I pray for everyone’s safety and well-being.”

As the cloud bursts triggered flash floods in Dacchan, Machail, Paddar and Bounjwa areas leading to rise in water levels of Chenab, the police and district administration sounded alert at a number of villages situated near the river banks and evacuated people to safer places, especially Paddar and Thathri areas.

Lt Governor Manoj Sinha expressed grief over loss of precious lives due to flash floods caused by cloudburst in Dacchan, Kishtwar. “My thoughts are with bereaved families,’’ he added on his official twitter handle. “The Home Minsiter has assured continous support from Central Government,’’ he said in another tweet, adding that “the entire nation stands in solidarity with all those affected by the unfortunate natural calamity’’.

Sinha announced an ex-gratia of Rs 5 lakh each for the next of kin of the deceased and Rs 50,000 to grievously injured, besides disbursement of Rs 12,700 under SDRF. Relief under SDRF for loss of houses, utensils, clothing, household goods, cattle, cattle shed, loss of agriculture land etc., shall also be provided by the Kishtwar Deputy Commissioner, he added.

Meanwhile, Union Minister of State in the PMO, Dr Jitendra Singh and UT’s  Lt Governor Manoj Sinha said they are monitoring the situation caused by the natural calamity.

In a tweet, Singh said that he spoke to Kishtwar District Magistrate and the Indian Air Force authorities for lifting the injured as and when required. “Keeping close track of the situation. Every kind of further help will be provided as per requirement,’’ tweeted Singh, who is also an MP from Udhampur-Doda constituency which includes Kishtwar.

Senior PDP leader and former legislator Fidroud Tak also expressed shock over the loss of human lives in natural calamity and called for intensification of the rescue operation to save those still missing.

Meanwhile, over a dozen villages in Akhnoor in Jammu district were put on alert as Chenab was flowing at 32.5 ft, 0.5 ft above the danger level. All the “ghats’’ and temples at Jia Potto near Akhnoor were submerged under river waters.

With Jammu division witnessing heavy rains for the past few days, the administration in various districts had issued an advisory asking people not to go near the water bodies as all the rivers and nullahs were in spate. The water level in rivers and nullahs was likely to further rise as meteorological department has predicted heavy rains in the coming days as well.

Spoke to Home Minister Amit Shah and discussed the incident of cloudburst at higher reaches of Shri Amarnathji Shrine. There was gusts of water near the Holy Cave area and the nallah adjoining the Holy Cave: LG Manoj Sinha

After 13 years, UPSC to take call on induction of police officers from J&K into IPS