No one will be able to disrupt development of J&K; says Amit Shah 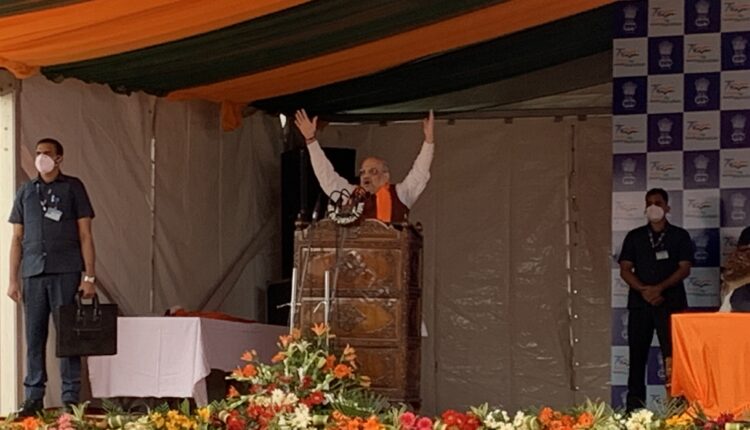 Terrorists will fail to do any harm if youth work for development of J&K; says Home Minister

During his maiden visit to the UT after abrogation of Article 370, he assured equitable development of both Jammu and Kashmir Valley

JAMMU, OCTOBER 24: Union Home Minister on Sunday said that terrorists will fail to do any harm if the youth work for development of Jammu and Kashmir.

Addressing a rally at Bhagwati Nagar here during his maiden visit to Jammu and Kashmir since the abrogation of Article 370 on August 5, 2019, he said that referred to a unique initiative of setting up 4,500 youth clubs involving 45,000 youth across Kashmir. “I tell you that if these 45,000 youth work in the service of Jammu and Kashmir then militants cannot do any harm,’’ Home Minister said.

He also assured equitable development of both the Jammu and Kashmir regions, saying that no one will be allowed to disrupt the era of development initiated by Prime Minister Narendra Modi in the Union Territory. “From this land of temples and of the Mata Vaishnodevi, which is also the birth place of Pt Prem Nath Dogra and martyrdom of Dr Shyama Prasad Mukherjee, I want to say that those bent upon disrupting this era of development are causing disruptions, but rest assured that no one will be able to disrupt and stop the pace of development in Jammu and Kashmir,’’ he said.

Without naming NC, Congress or the PDP, he said that some people are raising questions about the security situation in J&K. “I want to tell them that a total of 2,081 civilians were killed by militants from 2004-14, which comes to the killing of 208 civilians every year. However, from 2014 till September 10, 2021, only 239 civilians have lost their lives and this number works out to be 30 civilians a year’’. “But I have come to say that though this 30 number is less, we are not satisfied as we want to create a situation where not a single person gets killed and terrorism is wiped out completely,’’ Home Minister said.

Apart from his maiden visit to Jammu and Kashmir since August 5, 2019, Amit Shah’s tour to Jammu also coincided with the birth anniversary of Pt Prem Nath Dogra, founder of Praja Parishad, who spearheaded an agitation in 1950s.

Later in the evening, he visited forward areas along the international border in Jammu and interacted with BSF officers and jawans there. “It is a great day. The people of the country cannot forget him as he was the person who founded Praha Parishad and who joined Dr Shama Prasad Mukherjee giving the slogan that there cannot be two heads, to flags and two constitutions in a country,’’ Home minister said.

He also referred to various development schemes initiated under the leadership of PM Narendra Modi and took a jibe on the leadership of Congress, NC and PDP asking them as to what they have given to Jammu and Kashmir during the 70 year rule except for 87 MLAs and 6 MPs. PM Modi has made 30,000 people become elected representatives of the people, he said referring to panchayat elections in the UT.

He assured equitable development of both Jammu and the Kashmir Valley, saying “the days of discrimination with people of Jammu have gone and now no one can do injustice with you’’. However, “development will take place simultaneously both in Jammu and the Kashmir. There will be no injustice with anybody and both will develop and prosper together and contribute jointly in taking the country forward’’, he added.

In the evening, he visited BSF Border Out Post in Makwal along the international border and interacted with the officers and jawans there. He also visited local villagers and even had tea with them, besides visiting the bunkers built by government for them.

Accompanied by Lt Governor Manoj Sinha and other government dignitaries, Home Minister was received by Additional Director General of BSF (Western Command) N S Jamwal, who briefed him about the security scenario and BSF domination on International Border in Jammu. The Home Minister was given detailed briefing about the BSF border domination and its readiness to thwart away any challenges from across the border, officials said, adding that he also interacted with BSF troops on border. D K Boora, IG BSF Jammu Frontier was also present there, according to an official statement.

During the visit, the Home Minister was shown various aspects of BSF domination strategies on Jammu International Border. He was very impressed with BSF performance on Jammu border.

Amit Shah assured that BSF will be given all border related assistance from Government of India. He also interacted with the troops at the Border Out Post and they felt motivated by the visit of Union Home Minister. He presented fruit basket and sweets to the troops. He spent considerable time with the BSF troops at the BOP and appreciated the hard work and efforts put by BSF troops in safeguarding the border.