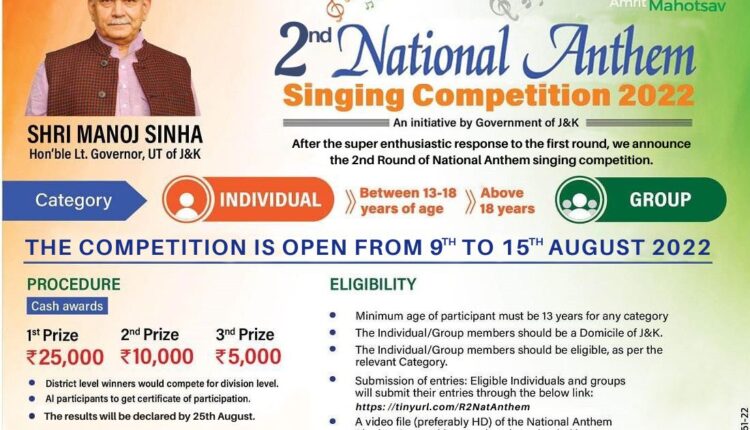 JAMMU/SRINAGAR, AUGUST 9: The Jammu and Kashmir government has called entries for second round of national anthem competition from August 9-15.

The entries, according to Department of Information and Public Relations, can be sent at https://t.co/I2bVzI7guQ.

Under the individual category, people in two subcategories, 13-18 years and above 18 years of age, were allowed to take part in the competition, whereas no age bar was kept for the group category.

The entries received will be sent to the respective Deputy Commissioners of each district, who will choose the best three from each category. The winners from each district will sing the National Anthem at their respective district headquarters on Independence Day. The list of district-level winners shall be forwarded to the Divisional Commissioners, who shall then finalize the winners.

The winners of the competition will get cash awards of ₹25,000, ₹11,000 and ₹5,000 for first, second and third prizes, respectively, besides getting an opportunity to perform the National Anthem at the Divisional level Independence Day celebrations.

Opposition in country isn’t up against just BJP but ‘authoritarian’ government too, says Mehbooba