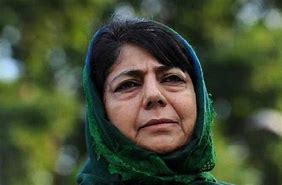 Srinagar, October 29: PDP president and former Chief Minister Mehbooba Mufti on Thursday accused Central Government of “turning Kashmir into a jail’’, saying it has “communal intention’’ with regard to it.

Talking to media persons after having been stopped from leading a demonstration in protest against Centre’s new land law permitting everyone on India to purchase land in J&K, she said “no one is allowed to express oneself’’.  “Neither journalists, nor members of civil society, or politicians are allowed to talk,’’ she added.

BJP is befooling people and using Kashmir in every election, she said, lamenting that people in Bihar demand jobs and this party tells them to go to Kashmir and purchase land there. The PDP leader said that she won’t allow BJP to loot and plunder the resources of Jammu and Kashmir and will fight it out with the help of people.

After barring from leading a protest against new land laws, Mehbooba Mufti while talking to media at her Gupkar based residence said that there is complete lawlessness in Kashmir and it has been converted into a jail.

She said that the Government of India has communal intention with regard to Kashmir. “Kashmir has been turned into a jail. Nobody is allowed to express himself. Neither Journalists or allowed to talk, nor Civil Society and Politicians. People in Bihar demand jobs and food from BJP and this party tells them to go to Kashmir and purchase land there. BJP can’t think beyond elections. It is befooling people and using Kashmir in every election.”

She accused BJP of “suppressing the helpless people of Kashmir’’, adding the party is silent over China who has killed so many soldiers. “Go and get the land occupied by China, she asked BJP, adding that “it can’t and won’t do this because it can’t overpower China’’.

Pointing out that PDP workers who were planning to stage protests against land laws were arrested from their homes during night hours in the Valley, she said “our office was sealed. There is complete lawlessness and people have been caged’’.

“BJP want to loot the land and resources of Jammu and Kashmir,’’ she said, adding that people of Ladakh were airlifted to Delhi when they started protesting against its diktats. “They want to loot everything from Kashmir and we won’t allow them to do so,’’ Mehbooba Mufti said, adding that “people of Jammu and Ladakh also have started coming round to the views of the people in Kashmir’’.

Without naming anybody, PDP leader in an apparent reference to Minister of State in the PMO Dr Jitender Singh said “everybody is not a Twitter politician’’ and she will “hit roads against the diktats that are coming from New Delhi’’. Everyday BJP issues new ‘Farmaans’, she said, adding that sometimes they “violate domicile rules’’ and sometimes “put our land on sale’’. “We won’t remain silent, come what may,’’ she said.

BJP is not doing this for common man, but to appease the capitalists of India. “A poor who lacks food and clothes can’t buy land here but this new land law diktat is for those rich capitalists who are hand in glove with the BJP,” she said, adding “today you stopped us using muscle power, tomorrow you will fail. People will respond to you in a big way’’.

She concluded her address with the couplet “Sarfaroshi ki tamanna ab hamare dil mein hai, dekhna ki zor kitna baazu-e-qatil mein hai.” (The desire to sacrifice our lives is in our hearts, we shall see how much strength lies in the arms of the enemy).