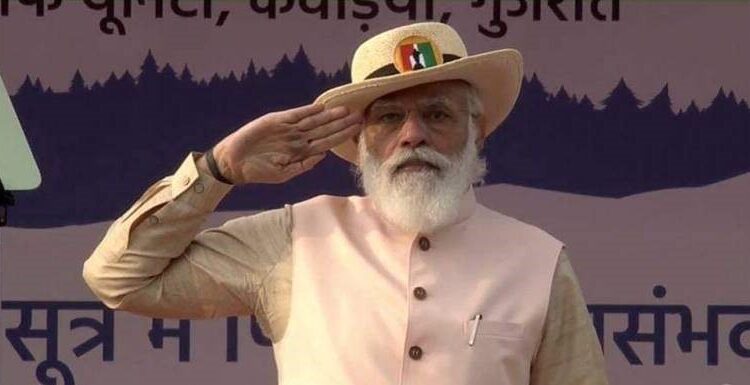 Vadodara, October 31: Prime Minister Narendra Modi on Saturday criticized Opposition for politicizing the 2019 Pulwama terror attack in which 40 CRPF personnel were killed, adding that Pakistan’s own admission to involvement in the attack has exposed the divisive forces.

Addressing the nation on the occasion of Rashtriya Ekta Divas which marks the 145th birth anniversary of Sardar Vallabhbhai Patel, he said “the country can never forget that some people were not saddened at the sacrifice of the security personnel during the Pulwama attack. At that time, these people were only doing politics…I request them not to do such politics in the interest of the nation.”

Pointing out that he PM Modi said he “silently endured” the allegations because it was not the time to indulge in spats, Modi appealed people not to play into hands of those who questioned the sacrifice of soldiers in Pulwama.

Two days earlier, Pakisan’s Science and Technology Minister Fawad Chaudhary had said in Pakistan National Assembly that “our success in Pulwama is success of this nation under the leadership of Imran Khan’’.

I assure every promise made to people of Himachal Pradesh…

56 cases were registered by CBI against MLAs and MPs from…

Today, it is my request to you all from this stage that if you have respect for Sardar, don’t indulge in such politics. Don’t play into the hands of such opportunistic politics and become pawns in their hands. We can only develop if we thwart such forces,” the Prime Minister said. He also referred to the abrogation of Article 370 and said that “Today, Kashmir has moved on a new path of development…Whether it is restoration of peace in the Northeast, or the steps being taken for development there, today the country is establishing new dimensions of unity.”

He said India had touched new heights of self-reliance on defence, and had its hawk eyes on the borders. “India is now moving towards becoming atmanirbhar in the area of defence. We have hawk eyes on our borders. India’s perspective at the borders has now changed, and the brave soldiers are equipped to give a fitting reply to intruders. We are equipped. We are building roads and tunnels in the borders despite challenges,” he added.

He also lauded India for bravely fighting against the pandemicadding that ”130 crore Indians together honoured the COVID19 warriors in their fight against this pandemic. The way the country has proved its collective potential during this time is unprecedented.”

Modi also inaugurated the country’s first seaplane service between the Statue of Unity at Kevadiya Colony to the Sabarmati Riverfront in Ahmedabad and participated in the Rashtriya Ekta Divas Parade. He said that the Sabarmati riverfront to Kevadia will help boost tourism in this area.