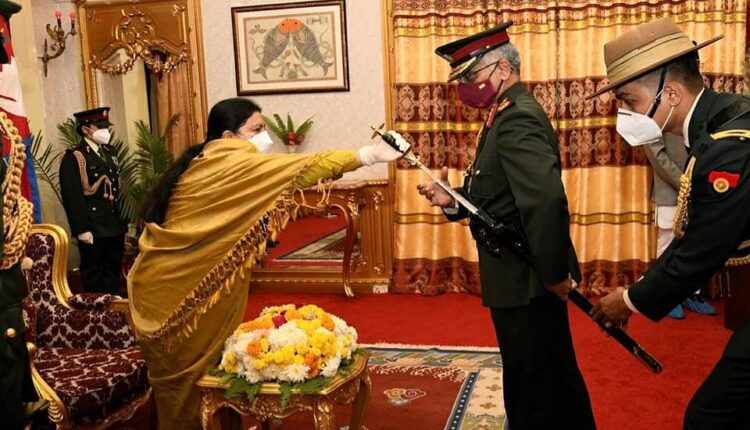 Kathmandu, November 5: The Chief of Army Staff of the Indian Army General MM Naravane was on Thursday conferred the honorary rank of General of the Nepal Army by President Bidya Devi Bhandari at a special ceremony organized at the presidential palace ‘ShitalNiwas’ here.

Narvane was also presented a sword and scroll during the function. The Nepalese Prime Minister KP Sharma Oli, Indian Ambassador Vnay M Kwatra and other senior officials of both the countries were present on the occasion.

This unique and deep rooted tradition reflecting strong ties between the two militaries, which has not parallel in the world, follows a seven-decade-old practice of conferring Army Chiefs of each other’s country with honorary title.

WHO alert for four Indian cold and cough syrups as 66…

United States | An Indian-origin family, including an…

General KM Cariappa was the first Indian Army Chief to be decorated with the title in 1950. In January last year, Chief of Nepali Army, General Purna Chandra Thapa, was also made the honorary General of the Indian Army by President Ram Nath Kovind at a ceremony in New Delhi.

Gen Naravane is on a three-day visit to the Himalayan country aiming to put the bilateral ties back on track. He met his Nepalese counterpart General Thapa at the Chief of Army Staff and presented medical equipment for two field hospitals of Nepali Army X-Ray machines, computed radiography systems, ICU ventilators, video Endoscopy units, anesthesia machines, lab equipment, and ambulances.

Naravane also paid homage at the martyrs’ memorial in the Army Pavilion and received a guard of honour in the Army Headquarters. On his final day of the visit, he is scheduled to meet Nepalese PM Oli.

United States | An Indian-origin family, including an 8-month-old child, who were…