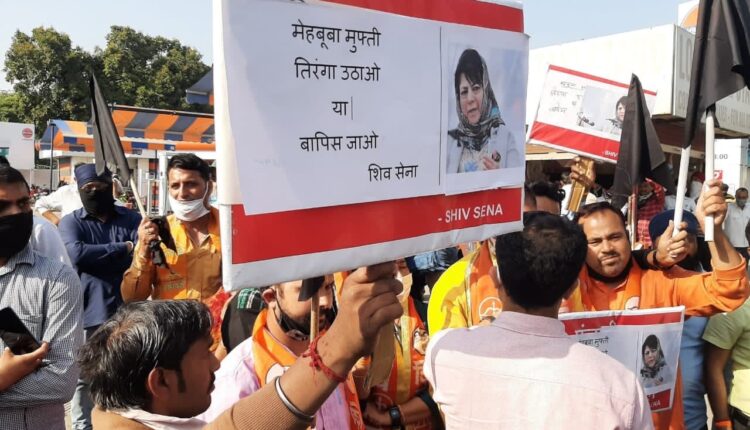 Agitating outside the Jammu Airport over her recent statement that she will not raise tri colour until Jammu and Kashmir got back its state flag, they raised slogans “Mehbooba Mufti Tiranga Uthao, Nahi To Bapas Jao’’ (Mehbooba Mufti raise tri color, or go back).  They even tried to block the road as Mehbooba Mufti came out of the Airport, but their attempt was foiled by the police. After the cavalcade of former CM and PDP leader passed away, the protestors dispersed.

Mehbooba Mufti arrived here in the afternoon from Srinagar to have consultations with senior party leaders to find out the mood in predominantly Hindu inhabited Jammu division ahead of the Saturday’s meeting of the members of People’s Alliance for Gupkar Declaration scheduled to be held at National Conference president Dr Farooq Abdullah’s residence in Bhatindi. National Conference president and former chief minister Dr Farooq Abdullah is arriving here on tomorrow.

From the airport, PDP leader drove to State Guest House where she had a two hour long meeting with senior party leaders. Later, former PDP legislator and senior leader Surinder Chaudhary said “Madam will be sitting at party office here tomorrow to meet members of civil society including lawyers, traders, agriculturists, transporters etc., who have expressed their desire to meet her”.

“At today’s meeting, we gave her our feedback of the situation in Jammu post abrogation of Article 370,” Choudhary said, adding the people here feeling cheated by the BJP who, after taking away from their identity in the form of special status and separate flag, has now opened sale of their land and recruitment to jobs for people all over the country.

He justified the statement of Mehbooba Mufti on tri-colour, saying what she had asked for restoration of state’s own flag which used to be hoisted along with the tri colour. If Nagaland can have its own flag, why not Jammu and Kashmir, he asked, adding that they will be pressing their demands within the parameters of Indian Constitution.

Meanwhile, Rashtriya Bajrang Dal’s UT president Rakesh Bajrangi described the Gupkar agenda “anti national” saying that they will not allow any meeting on it in Jammu. He asked the UT administration to cancel permission for this meeting as it was bound to vitiate atmosphere in the otherwise peaceful Jammu region.