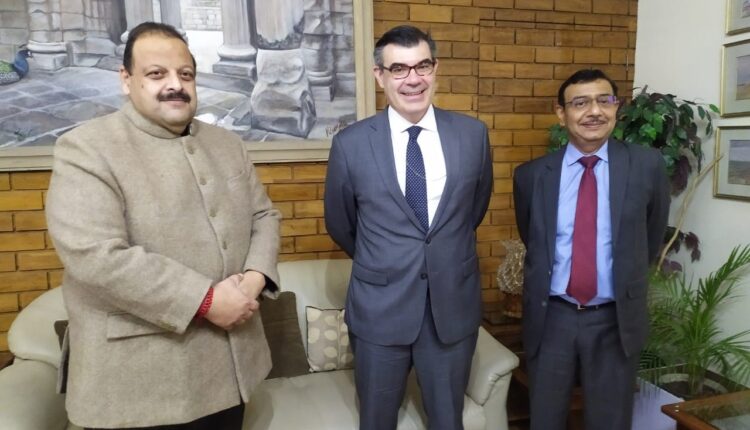 Jammu, November 24: To assess the post Article 370 scenario especially in view of the coming first ever District Development Council elections in Jammu and Kashmir among other things, US envoys on Tuesday called on National Conference and Apni Party leaders, besides a security analyst.

Sources said that Minister Counselor for Political Affairs in the United States Embassy in New Delhi, Graham Mayer accompanied by Senior Political Advisor, A Sukesh met separately with National Conference provincial president Devinder Rana, Apni Party spokesperson Vikram Malhotra and security analyst Brigadier (retired) Anil Gupta during the day. The meetings with each of them lasted for nearly an hour, with discussions ranging on issues from 4G to post 370 scenario, District Development Council elections among other things.

They also discussed with some of them about the Praja Parishad movement in Jammu so as to analyse reasons behind the pent up feeling among Jammuites of having been discriminated at the hands of Kashmiri rulers.

The visit assumes significance as it was the first visit by US envoys to Jammu Kashmir post Article 370 and after the 2020 US elections in which Joe Biden of Democratic Party, has been elected next US President defeating incumbent President Donald Trump. The US envoys are likely to meet BJP leaders here on Wednesday.

Meanwhile, National Conference in a statement here said that both the US envoys called on party’s provincial president Devender Singh Rana here and discussed issues of “common interest’’ with “focus of socio-cultural richness of unique and diverse Jammu and Kashmir’’. The envoys had interaction on a varied range of subjects, inter allia, environment, tourism, academics and sharing of knowledge and ideas aimed at promoting universal brotherhood, amity and tranquility between the communities, a statement issued by the party here said.

They also discussed the crucial need of societal involvement in ensuring a balanced environment, improvised health and hygiene, promotion of literacy and global initiatives to make the world a better place to live in.

Dwelling upon the evolution of democracy in this part of the great country, the NC leader recalled the role of the National Conference in political empowerment of the people and socio-economic transformation of Jammu and Kashmir. He dwelt in length the initiatives taken in strengthening democracy and forging the bonds of amity between various sections of the people. He said Sher-e-Kashmir Sheikh Mohammed Abdullah had envisioned a strong, prosperous and secular Jammu and Kashmir which is enshrined in his famous charter of Naya Jammu and Kashmir.

“This concept continues to be the guiding force for the party”, Rana added.

Rana and the visiting US team discussed a volley of subjects including initiatives on fighting poverty and disease besides measures to ensure tranquility between nations and continents. They also discussed the prevailing scenario in the wake of the global epidemic and hoped that the collective initiatives across the world will lead to effective vaccines to fight the virus.

The Apni Party spokesperson Vikram Malhotra said that they discussed the current political situation in Jammu Kashmir, coming District Development Council elections and also about the emergence of Apni Party.