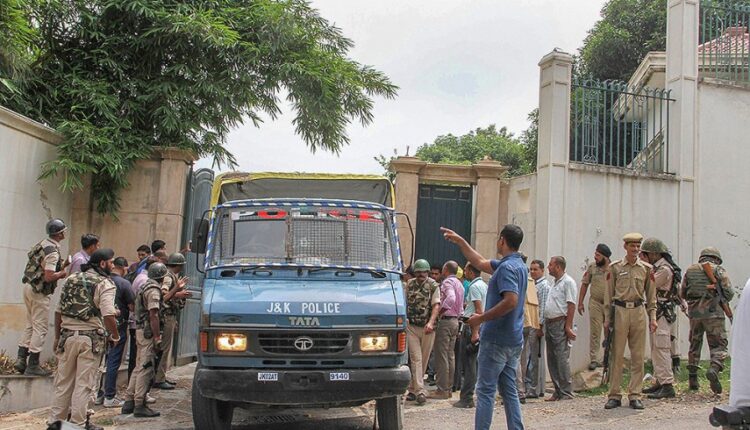 Jammu, November 25: Tension broke out in Sunjwan’s Bhatindi area on Wednesday afternoon a large number of National Conference workers and local people gathered against nearly dozen BJYM workers who had come there to hold demonstration outside the residence of former Chief Minister Farooq Abdullah in protest over the appearance of his and his son Omar Abdullah’s name in the Rs 25,000 crore Roshni land scam.

Police had to resort to cane charge to disperse the agitating NC workers and local people and take BJYM workers into custody for their safety. The BJYM workers were later released from police custody late in the evening.

The UT administration in a list of people who had physically occupied state land and whose details were not mentioned in revenue records mentioned the names of former Chief Ministers Dr Farooq Abdullah and his son Omar Abdullah as having encroached 7 kanal and 7 marla state land to raise their house in Sunjwan area. The list was uploaded on official website of the Divisional Commissioner, Jammu, Sanjeev Verma, on Tuesday in compliance with the directions of the high court which had declared the Jammu and Kashmir State Land (Vesting of Ownership to Occupants) Act, 2001 as void ab initio and cancelled all the land transfers done under it.

Between 50-60 BJYM workers led by their president Arun Dev Singh earlier gathered at the outside the road leading to Sunjwan and Bhatindi areas, but all of them could not proceed towards Abdullah’s residence in view of deployment of large police contingent who had also laid concentrina wire at regular intervals to regulate movement of people. However, nearly half a dozen of them managed to reach near Abdullahs’ residence through adjoining lanes and bylanes and started raising slogans.

Within no time, National Conference workers and local people gathered in large numbers and surrounded the BJYM workers. As a result, the latter could not burn the effigy of Abdullahs.

Sensing trouble, police immediately intervened and resorted to cane charge to disperse NC workers and local people and in the meantime, taking the BJYM workers into custody by making them board its nearby vehicle. They were immediately taken to nearby police station where they were kept till late evening.

The locals criticized BJYM workers for trying to vitiate atmosphere in the area. This house has been standing on this land here for the past six years and everybody knew that it was on state land, but they (saffron party) have come to protest against it now ahead of the DDC elections, one of them said. Another described it poll gimmick by saffron party, saying they resort to such “cheap tactics to polarize people’’ every time elections are round the corner as they have nothing else to showcase the electorate.

An NC activist Sandeep Singh said that they were not averse to their holding demonstration against Abdullahs over the issue, but what was the need to come all the way to their house here when none of them was present here. If they had to hold a demonstration, they could have done it anywhere else, he added.