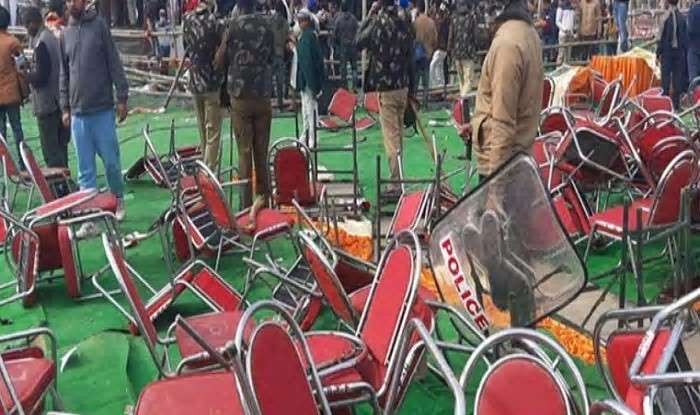 New Delhi: Haryana Chief Minister Manohar Lal Khattar on Sunday canceled the scheduled ‘Kisan Mahapanchayat’ programme after a group of protesting farmers ransacked the venue and took control of the makeshift helipad where his helicopter was to land in Karnal district.

Earlier, police fired teargas shells and used water cannons to disperse farmers, who had gathered there to oppose the holding of ‘Kisan Mahapanchayat’ aimed at highlighting the benefits of the three Central farm laws.

However, despite police using force, agitating farmers carrying black flags broke through nearly half a dozen police barricades and damaged the makeshift helipad.

While BJP leader Raman Mallik alleged that the unruly was done by farmers at the behest of BKU leader Gurnam Singh Charuni, farmers associated with the Bharatiya Kisan Union (Charuni) accused Khattar of attempting to divide farmers by holding such meetings. “What was the need to hold ‘mahapanchayat’ when thousands of farmers have been sitting at the borders of Delhi for the past 45 days, demanding to revoke the farm laws,” a protesting farmer said.

Congress leader Randeep Singh Surjewala slammed Chief Minister Khattar for using water cannons and teargas shells against farmers. “Respected Manohar Lal ji, please stop this pretense of Kisan Mahapanchayat in Kaimla village. By playing with the sentiments of those who provide us with food, please stop meddling with the law and order situation”, the Congress leader tweeted. “If you want to have a conversation, have it with those who have been protesting for the last 46 days,” he added.