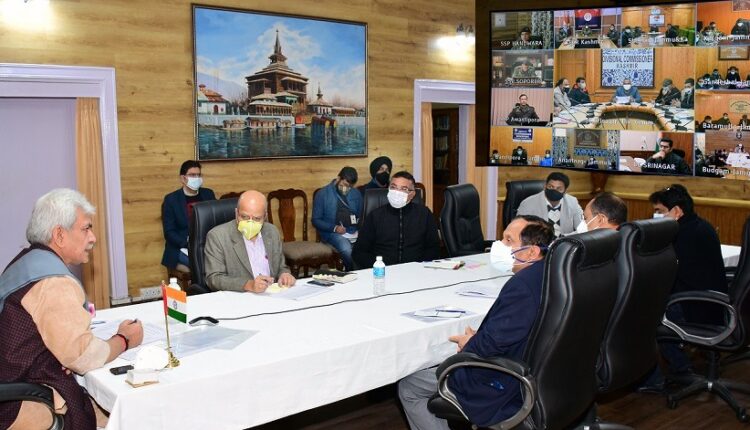 The Lieutenant Governor was chairing a meeting to take stock of the winter management, particularly, snow clearance efforts of administration, with all DCs and SSPs of Kashmir Division, through virtual mode, at the Raj Bhavan here today.

Pertinently, ‘Heavy Snowfall’ was not figuring in the list of ‘Natural Calamities’ under SDRF norms, due to which disbursement of relief and ex-gratia for the damages due to heavy snowfall was not possible for the Districts’ Disaster Management Authorities.

Due to declaration of ‘Heavy Snowfall’ as a ‘natural calamity’; processing of ex-gratia relief under SDRF will become faster, thereby giving a huge relief to the affected public of snow bound areas.

The Lt Governor sought a detailed report on issues and problems faced by the public due to heavy snowfall and future course of action of the Administration at all levels to overcome the challenges thereof.

On being apprised about the shortage of small rescue vehicles for the movement of people requiring medical assistance, particularly, in remote areas and areas having narrow lanes, the Lt Governor directed that 4×4 rescue vehicles / ambulances be provided to snow affected Districts with immediate effect for helping the people in distress.

The Lt Governor asked the officers to be more sensitive and responsive to the issues of the public and take requisite measures to minimize the difficulties of common people.

“Be visible and take early measures. Need more feet on the ground. Quickly reach out to the people to address their needs and requirements”, the Lt Governor asked the Officers.

The Lt Governor lauded the efforts of employees working 24×7 on ground in challenging climatic conditions. He directed for rationalizing deployment of machinery and equipment for snow clearance from the roads, besides making necessary emergency facilities available to render critical help in contingent situations.

Taking cognizance of media reports, social media posts and grievances received from the public, the Lt Governor asked the Administration to identify gaps and take immediate corrective measures to fill the same to redress the concerning issues of the people. He also directed the officers to continuously monitor the situation and work in synergy with various departments to avoid any inconvenience to the people.

During the meeting, the Lt Governor took a detailed district wise review of the overall status of power scenario, snow clearance, road connectivity, water supply, essential supplies, disaster management, food supplies, availability of Power buffer stock and other issues. He emphasized on provision of all basic services to the people, in particular, power, water, road connectivity, food, LPG and other essential commodities without any interruption. He further directed the officers to keep a check on the increase in prices of essential commodities, if any, and take corrective measures.

The Lt Governor also assessed the implementation of the directions passed in previous winter preparedness meetings.