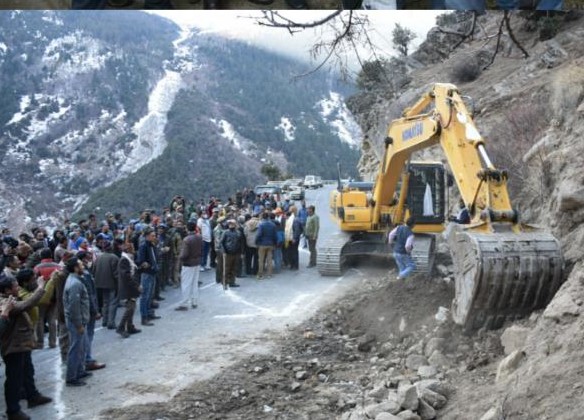 Responding to the complaint of the locals during weekly Block Diwas proceedings at Gulab Garh in Paddar area, he said strict action will be taken against all the erring contractors and executing agencies who are not performing well or who are hampering the pace of developmental works in the district.

During the programme, delegations led by members of the Panchayati Raj Institutions apprised the DC about issues confronting them. They demanded speedy completion of Machail road, electrification of left out hamlets of Kabban Panchayat, establishment of PHC at Machail, construction of bridge at Dangail and Hamouri, shifting of transformer at Laiye, construction of Hanswar water reservoir, functioning of Bank branch at Affani, revision of compensation rate of land acquired for Karthai hydel electric project, augmentation of  water supply at Atholi, repair of Kund Pohali bridge, establishment of health centre at Kabban, timely completion of Garh Kukardran road, disparity in  electricity billing, shortage of staff at PHC Massu, holding of awareness camps by departments, among others.

Apart from this, the sarpanchs of Chitto, Ishtiyari and Gandhari Panchayats raised the issue of providing tele-communication facility, shortage of staff at HS Sohal, timely completion of the  Panchayat Ghar Sohal, restoration of irrigation canal at Sohal, Electrification of left out villages of Panchayat Sohal besides providing of solar lights to snow bound areas, providing of water facility to Tun and provision of girls Hostel for students of far flung areas at Atholi among others.

The BDC chairperson highlighted the general issues like the nonfunctioning of various departments due to the shortage of staff and field line functionaries, establishment of Red Cross unit at Paddar and sluggish progress on Chitto road.

After listening to the grievances of the people, the DC redressed many grievances on the spot by passing slew of directions to the concerned.

Regarding the construction of Bridge at Hamouri and Dangail, he directed the DFO Kishtwar to do the need full. He further informed the masses that notices have been issued to the executing agencies and contractors who have shown poor performance in execution of works allotted to them.

Tehsildar Paddar was asked bring back the land records within week, which have been sent to Kishtwar for scanning so that people may not suffer any more.

The DDC asked for coverage of the left out persons under the Ayushman Bharat Sehat scheme as per 2011 census. He directed the CMO t ensure   universal coverage of the people under this scheme based upon the verification by concerned tehsildar.

He also assured the participants that the electrification of  left out villages of Kabban would be done within two three months. In this regard, he directed XEn PDD to take up the work immediately for its early completion.