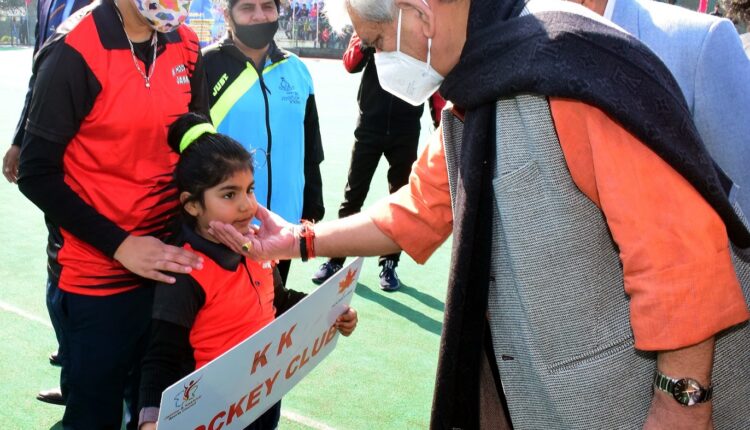 1250 matches to be organized across all the districts in four different disciplines – Football, Hockey, Volleyball and Kabaddi, around 8500 players participating in the games during the Premier League

Speaking on the occasion, the Lt Governor congratulated the sports department, coaches and family members of the sportspersons and said that J&K is perhaps the first to organize 1250 matches across all the districts in four different disciplines – Football, Hockey, Volleyball and Kabaddi.

It is no less than any festival for around 8500 players participating in the games. The talent showcased by the players on the ground is a result of their immense hard work, determination and support from the family, coaches and the officials of the sports department, he added.

The Lt Governor said that the first phase of the premier league was launched in November-December last year in the Kashmir Division and according to initial outlines, it was planned that the matches in all four disciplines would begin simultaneously. But due to the inevitable reasons, it could not be started in Jammu region. Now, with the launch of phase one in the Jammu District, the Premier League has also been started in other districts of Jammu Division.

The Lt Governor observed that this Premier League is an ambitious sporting event for the youth which will enhance the quality of competition, performance of the players ensuring their participation in National and International level.

While underscoring concrete measures taken by the UT Government for the holistic development of the sports sector in J&K, the Lt Governor observed that for the past few months, the Government has been making untiring efforts for paving a strong foundation for the development of all sports disciplines, sporting infrastructure and allied activities in the UT.

Rs 200 Cr under the Prime Minister’s Development Package has been sanctioned for upgradation of sports infrastructure and encouragement of budding talent in the field.  Another Rs 30 crores have been sanctioned by the Government for boosting sports infrastructure, training facilities and providing professional coaches to hone the local talent, the Lt Governor maintained.

For promotion of sports at the grass-root level, elected representatives of Panchayats have been roped in and all the Panchayats have been provided with sports kits worth Rs 20,000 each during the recently concluded Back to Village-3 programme as per the local requirements, he added.

Last year in November, the Government signed an MoU with Suresh Raina Cricket Academy to develop budding cricketers of J&K to National & International level with a comprehensive training programme at a professional level. Ace Cricketer Suresh Raina is honing the skills of the talented youth from every nook and corner of the UT.

In December last year, a selection trial was held in Jammu in which 500 youth from Doda, Kishtwar, Reasi, Rajouri and other areas participated, he said.

Pointing out that global pandemic delayed the development of the sports sector, he said that the work has taken momentum in the last few months and 17 sports projects have been completed, while three more projects will be completed by March this year. “We are working exhaustively for the development of sports infrastructure and allied activities in the UT,’’ he said, adding that a number of multipurpose indoor sports halls, playgrounds, stadia and other sports related facilities have been inaugurated in a short span of time.

Last year, in the month of October, Sainik Colony Sports Stadium was inaugurated. Other than this, indoor halls at Kathua, Samba and Rajouri were also inaugurated, he maintained.

The Lt Governor observed that all 20 districts of J&K have been given approval for Khelo India State Centres of Excellence. All Centres will be connected with former Champions of the Union Territory. In the first phase, 40 such Centres of Excellence will be established and later it will be increased to 120. It would ensure that the talented young sports person can take maximum benefit from the experience of former champions of the UT.

The data shows that Jammu and Kashmir has a strong and advanced sports infrastructure than any other state or UT of the Country, he added

In addition to the new infrastructure, the Lt Governor said that efforts are afoot to bring qualitative change in the existing facilities.

The Lt Governor assured the sportsperson of Jammu and Kashmir of all the requisite facilities so that they can also make the UT proud like Bavleen Kour, Suvidha Saran and Shivani Charak.

The Lt Governor also interacted with the players and asked them for maximum utilization of the opportunity to showcase their talent and wished them a successful sporting career ahead. He said that the District Premier League is just the beginning; the same will be organized at the Divisional level. This is the first and important step towards your aim and dreams, he added.

Speaking on the occasion, Farooq Khan, Advisor to the Lt Governor said that the J&K Government is embarked on an ambitious mission to achieve holistic development of sports in the UT. To achieve the desired results, innovative measures have been taken for the development of the sports sector in the UT by ensuring modern sports infrastructure, he added.

During his welcome address, Sarmad Hafeez, Secretary to the Government, Youth Services and Sports Department highlighted the key initiatives taken by the Department for promoting sports activities across the UT.

A Hockey exhibition match was played to mark the day. Cultural activities were demonstrated, besides ongoing premier league match pictures were displayed on the occasion. Vote of thanks presented by Dr. Naseem Javaid Chowdhary, Secretary J&K Sports Council.

It was informed that similar Premier League in 12 Sports Disciplines shall be organized in the next financial year to provide a platform to the youth of the U.T J&K to showcase their talent.

Prominent among others present on the occasion were, Dilbag Singh, DGP, Bishwajit Kumar Singh, Administrative Secretary, School Education Department, and Officers of J&K Sports Council. The event was also attended by members of various Sports Association as well as Sports personalities from across the UT.