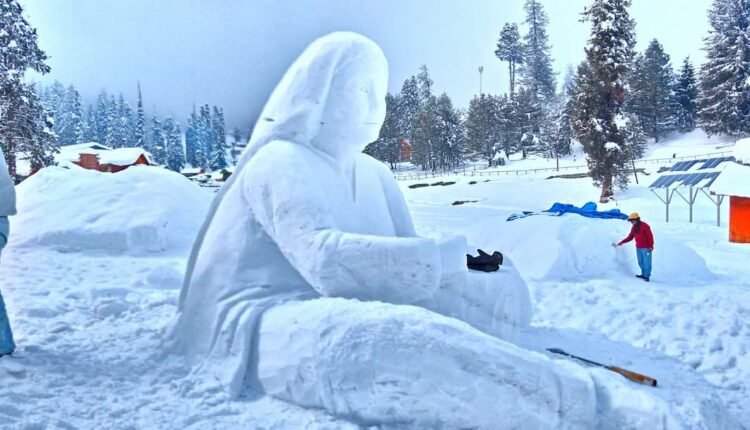 Srinagar: A 4-day snow sculpting competition began at Gulmarg on Wednesday. Being organized by the Department of Tourism Kashmir so as to provide a platform to the budding artists, an over 30 amateur and professional sculptures drawn from various districts of the Kashmir Valley are participating. They have been shortlisted from among a large number of participants who had responded to the department’s notice for the event.

Jammu: Jammu Municipal Corporation on Wednesday sealed 11 illegal structures in Marble Market, Sunjawan, Deeli (Bye-Pass Road), Durga Nagar and Bathindi areas of Jammu city and its outskirts. Pointing out these included 10 commercial and one residential buildings, official sources said that action against the violators was taken under the provisions of Section 8(1) of the Jammu and Kashmir Control of Building Operations Act, 1988, they said. The JMC has demolished/sealed a number of unauthorized constructions during the recent past in particular to desist the violators from raising the constructions without permission and in-violation of the approved building plans which causes impediment to the plan development of Jammu City.

Doda: As part of the one month online foundation course for its newly admitted students, the District Development Commissioner,  Dr Sagar D Doifode on Wednesday held online interaction with the students of the first MBBS batch of the Government Medical College here. The DDC gave students tips for the overall personality development and acquainted them with the political, demographic as well as health scenario of the district. Through power point presentation, he also informed them about the various national health programs under implementation in the district and the achievements of the district administration in their effective implementation for the general good of the people.

Kahua: Deputy Commissioner, Kathua, O P Bhagat on Wednesday flagged off a walkathon as part of the ongoing Road Safety campaign aimed at sensitizing people about road safety measures. The road safety awareness rally-cum-walkathon started from Government Degree College for Women in which hundreds of school and college students and volunteers participated. A street play staged by the college students on the theme of  ‘Essence of Road Safety and its positive impact in our daily life’ was also organized on  the occasion.

Ramban: Deputy Commissioner Mussarat Islam directed the officers of the National Highway Authority of India and its construction agencies to complete the construction work on the damaged retaining wall of the bridge at Kela Morh so as to restore movement of two way traffic on Jammu-Srinagar national highway. To monitor the progress of work Additional Deputy Commissioner Harbans Lal visited the site and took stock of the progress of restoration work. He was informed by the Engineers that construction work on the damaged part of approach road is going on war footing and it would be completed in next 4 to 5 days. He directed the agencies to expedite the work keeping in view the importance of the highway.

Ramban: District administration on Wednesday conducted public outreach programmes under Block Diwas initiative at Gool, Banihal, Ramsu, Ramban and Batote to take on the spot appraisal of the public issues, grievances and demands. While SDM Gool Giasul Haq conducted a public grievances camp at village Harra in Kalimasta panchayat, ADC Harbans Lal presided the Block Diwas meeting at Ramban and resolved most of the issues on the spot. At Ukhral, a large number of locals put forth their grievances and other issues before the SDM Ramsoo, Dil Mir Choudhary, who assured them that all genuine demands will be redressed at an earliest.