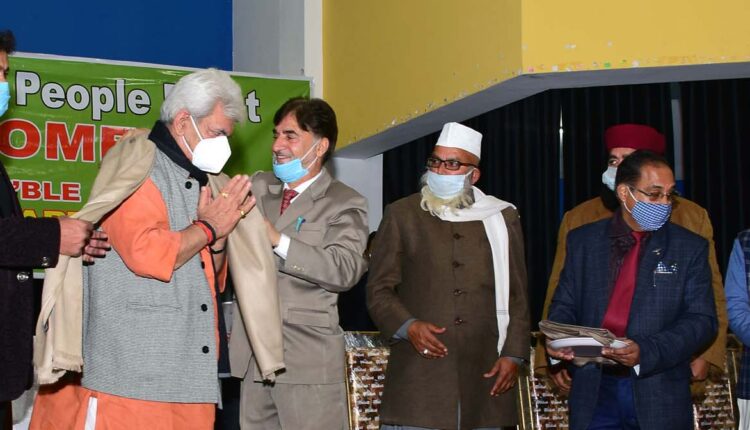 Ianugurating a conference of prominent religious leaders on “De-radicalization’’ organized by JKNPF at Gurjar Desh Charitable Trust hall in Channi Himmat here, he termed modern education and holistic development as the only solution to all the problems. He laid special emphasis on adopting an integrated approach for de-radicalization and counter-radicalization through seamlessly involving three pillars- civil society including Muftis and community influencers, family and civil administration.

“Closely examining the radicalization process is the need of the hour, which I believe is fourth generation warfare. We should assess and develop resources, measures and mechanisms, required to counter such elements and extremist ideologies”, said the Lt Governor. He urged community elders and influencers to use the technology to identify and monitor mischievous preachers for a broader mapping.

De-radicalization is the process by which an already radicalized person is brought back into mainstream of the society, while counter-radicalization is the process by which vulnerable persons are prevented from getting radicalized, Lt Governor pointed out. “We must check propagation of non-contextual as well selective messages from holy books. If anyone is treading a wrong path, it’s our responsibility to show him the right path,’’ he maintained.

“We have to develop the concept of winning the hearts and minds as future power will be built by those societies and the country, which control the minds and hearts of the people through equitable development of the society,’’ he said, calling for focusing on a comprehensive measures involving community, family and much required stress on positive messages, introducing books on prominent Muslim figures like Dr. APJ Abdul Kalam, Maqbool Sherwani, Salim Ali etc, besides chapters on peace and harmony in schools and madrasas.

If we trace the history of radicalization, it has its footprints somewhere else, and it was being promoted in an organized manner through social media, he said. Through the joint efforts, a lot of control has been exercised on it but the attempts towards radicalization are rapidly increasing using the technology, he added.

He said that J&K has been home to values of equality and fraternity, cultural relations, communal harmony and sufi traditions. However, there are some disgruntled elements also who have sown the seeds of hatred to divide the people, L-G said, expressing hope that the religious leaders here will show the right path to elements spreading hate and to the disoriented people.

The initiative of the religious leaders through this religious meet will strengthen the secular character of brotherhood, and will also bring the misguided people who have walked away from the path of harmony and brotherhood, back into mainstream, observed the Lt Governor. He also highlighted various initiatives taken by the government for the welfare of youth