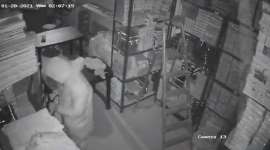 However, the accused was later nabbed by police. He was Shekh Noor who worked in the area as an electrician.

The footage of the CCTV camera installed in the showroom showed the burglar entering the three storeyed Anjali Jewellers around 9.40 pm and leaving along with ornaments around 3.50 am. He had reportedly entered the showroom after jumping from an adjacent building using a rope.

The manager of the showroom informed Kalkaji police about the burglary and showed the footage of the thief wearing a PPE kit. Soon, Delhi Police officials visited the store and recorded statement of all the employees and security guards. A forensic team was also called to the spot to get fingerprints.

According police, the accused first entered a flat by breaking the lock and then he reached the terrace from where he crossed the roof of three buildings. The accused has been arrested and 25 kg of gold recovered from his possession.

Army Havildar killed in snipper fire from Pak in Poonch