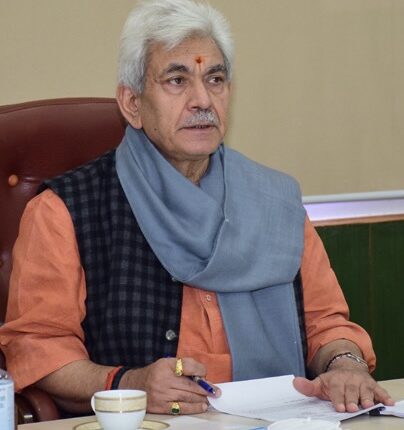 L-G takes people’s feedback on online Grievance Redressal System JK-IGRAMS; asks officers to be more sensitive & responsive to the issues of the

During the two-hour long live interactive programme, the Lt Governor interacted with as many as 22 applicants, randomly selected from across the UT, through videoconferencing, and took firsthand appraisal of their issues and  In one case, an applicant apprised the Lt Governor about his grievance of facing shortage of raw material for making pottery and saving his ancestral trade, on which, the Lt Governor directed the concerned Deputy Commissioner to resolve the issue on priority and assured the potter that all necessary support would be given to him from the government.

Similarly, a Public Health entrepreneur who has established a hospital raised the issues of extension of benefits under related schemes. The Lt Governor, while lauding the efforts of the applicant, assured him all possible assistance under the UT Government’s initiatives like J&K Healthcare Investment Policy and New Industrial scheme.

In another case, the Lt Governor, on being apprised about the issue of allotment of land for establishing Composite Regional Centre by a social activist, directed the concerned Divisional Commissioner to identify the land for the same. He further assured the applicant that the matter would be taken up with the Union Ministry of Social Justice and Empowerment for its early redressal.

Earlier, Secretary, Public Grievances, Simrandeep Singh briefed the Lt Governor on the status of grievances and measures taken to improve the efficiency of the grievance redressal system.