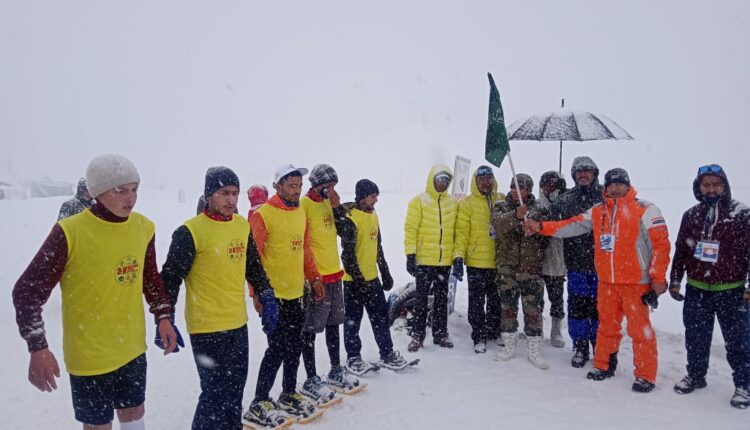 Speaking on the occasion, MoS, Kiren Rijuji said that Nstion Centre of Excellence is a value addition to the sports infrastructure at Gulmarg, to make it centre of adventure and professional sports activities with signature effect on over all manifestation of sports talent of the youth.

He said this will create a lot of opportunities for the locals, besides serving the aim of government to make Gulmarg an international destination of sports.Meanwhile, the continued snowfall throughout the day led to the cancellation of several events that were scheduled to be held at Hill Top and Kongdori. The rescheduled date will be notified by the Winter Games Association.

Also, Long distance Snow Shoe competition event was held for Mens Senior and Junior categories which were flagged off by Col. Ashutosh.

Participants showed enthusiasm during the course of sports events and said that they are overwhelmed with joy besides termed the experience of winter games very impressive and memorable.

Besides, several sports events for senior categories of Men and Women, individual and group games were organized by the J&K Sports Council so far.

Event was flagged off by DG, Sports Authority of India, Mukund Pradhan in presence of Director Tourism, Jammu, Dr Naseem Javid Choudhury and other officers and officials of the sports department.

In women’s Icestock sports event, Ladakh secured Gold, J&K A team had Silver while Chandigarh and J&K B team had bronze.

Similarly, in Mens category of Icestock sport, J&K A team and J&K B team wrested Gold and Silver medals respectively while Andra Pradesh and Karnataka secured Bronze each.

Azad reciprocates; praise PM Modi at a function in Jammu