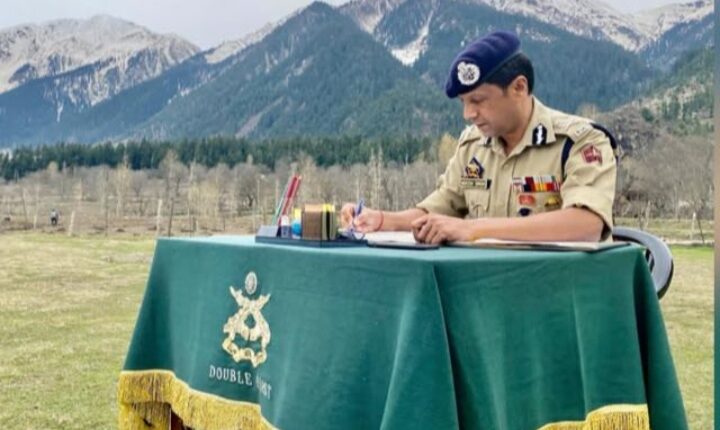 Jammu: Additional Director General of Jammu and Kashmir Police, Mukesh Singh, is one of the three IPS officers shortlisted by the Central government to assist in the preparation of framework for evaluation by Financial Action Task Force (FATF) of the effectiveness of India’s anti-money laundering regime and measures to check financial crimes.

These officers, according to a Central Government’s letter to the DGPs of J&K, Punjab and Gujarat, is part of efforts by the Union Finance Ministry’s Department of Revenue, Ministry of Finance to coordinate efforts ahead of India’s mutual evaluation by FATF.

With involvement of officials also from Enforcement Directorate and National Investigation Agency, the Intelligence Bureau (IB) as a nodal agency will play a key role in this regard, sources added.

The Central Government has now sought permission from the DGP of J&K to allow the IGP Mukesh Singh to assist in preparing framework for the FATF review.

Singh, in view of his having served in militancy infested Jammu Kashmir in different capacities for decades, apart from heading country’s premier investigation agency – NIA, has vast knowledge and experience in fighting the war against terror, besides dealing with cases of hawala transactions and cross border narcotics smuggling aimed at funding terror.

While there were several states including Maharashtra and the North-East affected by left-wing extremism, the choice zeroed on Mukesh Singh, Ananya Gautam and Himanshu Shukla, sources in North Block said.

Articulate and having wide knowledge, Mukesh Singh along with other officers will demonstrate before visiting Financial Action Task Force (FATF) of the effectiveness of India’s anti-money laundering regime and measures to check financial crimes.

India had submitted to a mutual evaluation of the country’s anti-money laundering regime and legal measures to check financial crimes by FATF.

Slated to commence in 2020, this process was delayed owing to the Covid-19 pandemic. The mutual evaluation will be conducted by the Asia Pacific Group of the FATF.

New born declared dead turned out to be alive during burial…

Singh along with officers nominated by other states will be required to undergo training, participate in interviews, aid FATF during on-site visits and demonstrate the effectiveness of India’s fight against terror, sources said, adding the whole process could take 14-18 months from beginning to end.

An inter-governmental body with influence over 200 countries and jurisdictions, the FATF has 40 recommendations to fight money laundering and 11 immediate outcomes. In 2001, crippling terror financing was added to the FATF’s agenda along with countering the proliferation of Weapons of Mass Destruction (WMDs).

During its mutual evaluation of India’s legal framework relevant to the scope of inquiry, the FATF will inspect cases pertaining to money laundering, confiscation, terror financing, targeting financial sanctions related to terrorism. In addition, the FATF will also look at cases where terror financing has been linked to individuals with political influence and reporting of suspicious transactions

Headquartered in Sydney, the Asia/Pacific Group on Money Laundering (APG) is also likely to inspect whether enforcement agencies in India use FIU reports to probe money laundering and terror financing.

Set up by the Government of India in 2004, the FIU conducts regular training to ensure compliance.

It is worth mentioning here that besides the United States, India is the only country in the world to have its own certification program with respect to laws pertaining to money laundering.

The Enforcement Directorate (ED) has done significant work to counter money laundering operations in the country.

In February this year, the FATF had decided to retain Pakistan in its grey list citing the country’s failure to fulfill three key commitments made in its anti-terror-financing action plan.