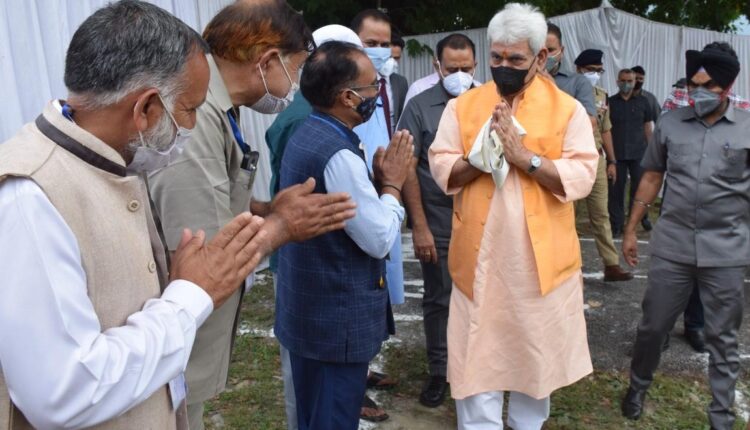 Kulgam: The Jammu and Kashmir’s Lieutenant Governor Manoj Sinha on Sunday said that “there will be no mercy for the militants and their supporters” as the administration led by him is committed to ensure peace and development in Kashmir—the land of Sufi saints.

“In a place like Kashmir where there are sufi saints everywhere, there is no place for violence and militancy,” LG said while addressing a function in South Kashmir’s Kulgam district. “In the land of sufi saints like Syed Simnani (RA, who have spilled the blood and sweat to promote peace and defeat violence, there is no place for any sort of violence. The Union Territory administration is committed to promote the vision of Sufi saints like Syed Simnani (RA) and promote the culture of peace and progress in the region,” he said, according to Kashmir based news agency.

He said those joining the path of violence will be dealt with strictly. “I urge the Imams and Khateebs to play their role and keep a watch on children so that they don’t tread a wrong path,” he said, adding that unfortunately, some elements and the neighbouring country doesn’t want peace to be promoted in Kashmir, but “we are committed to defeat violence.”

Youth who have choosen wrong path must shun violence and join the massive transformation, the LG said. “Those trying to mislead youth by pushing them towards violence are playing with the sentiments of hundreds of people of Kashmir,” he said.

The LG praised Tanvir Khan, the son of a rikshaw puller, who cracked the Indian Economic Service (IES) stating that Tanvir made the people of not only Kulgam but entire J&K feel proud. “Youth must take cue from him and follow his footsteps and choose better future,” he said

Lieutenant Governor, Manoj Sinha visited Kulgam and while addressing a public meeting paid his tributes to policeman Nisar Ahmad Wagay, who attained martyrdom in a cowardly terror attack in the district, yesterday.

Extending his condolences to the bereaved family, the Lt Governor said that the whole UT administration is standing in solidarity with the family and would provide every possible support and assistance to them.

“My visit after last evening’s cowardly terror attack is a clear message to the terrorists and their sympathizers that we will root out terrorism from this pious land. The Government is determined to make development a mass movement”, the Lt Governor asserted. The Government will not bow down to the nefarious designs and motives of terrorists. He said all those who are directly or indirectly involved in terrorist acts will not be spared, he added.

Underscoring that Youths are the focal point of the government’s Developmental Agenda, the Lt Governor appealed everyone to join their hands for the progress and development of the UT.